My Country: a Work in Progress 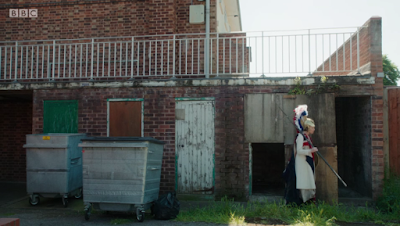 I watched My Country: a Work in Progress on BBC Two last night.

This put onto TV a National Theatre play about Brexit by poet laureate Carol Ann Duffy and director Rufus Norris (both Remain voters). It interspersed acted-out vox pops collected from several parts of the UK (though not London or the South-East) with clips of politicians, all framed by dramatic moments from 'Britannia' and several 'Parts of the United Kingdom'. It ended with the words of Jo Cox captioned against a black backdrop - "We are far more united and have far more in common with each other than things that divide us".

Their declared aim was to leave their London bubble and to listen to voices beyond that bubble. 'It's the listening that matters', was the programme's message.

Was it biased? Did Rufus Norris succeed in his stated intention to leave out his own political views (which are much as you'd expect) and let us listen to a full and fair spectrum of people's voices?

I think the programme handled the matter of bias well - from the politicians to the vox pops. And I had to smile at the Guardian's account of how Rufus Norris managed to do so:

Norris has been careful to create a balanced picture, to the extent that his associate director has been tasked with counting each speech, and categorising it according to whether it is pro-remain or leave.

That sounds very much like the methodology used by groups like News-watch (and me). It's the good old 'stopwatch'/'number-crunching' technique so decried by the James Hardings of this world. I'm so glad the National Theatre agrees with us about this! (Of course this is the best way to do it, whether to monitor balance or to achieve balance in the first place.)

The completed script has more leave voices (more than the 52% of votes to leave), in recognition of the fact that more of the audience will come from a remain position.

That Guardian article refers to the original London play rather than the BBC audience, but that's still striking. Rufus himself is then quoted:

“We have been incredibly diligent, making sure that what will inevitably be perceived as our pro-remain bias is properly balanced. We push it further the other way because you understand that the majority of people who will come to see it are likely to be on the remain side, because theatres are seen as a liberal echo chamber".

As are BBC dramas! So it's good to have one that determinedly tried not to be seen as a liberal echo chamber for once.

My main concern was its mood. It was just so gloomy about where we are now. Yes, the country is divided and there is quite a lot of anger out there and people aren't listening to each other as much as they should be, but the glum faces, the intensity, the anger, the worried Britannia, the wistful variations on Greensleeves playing throughout, were a bit too much...

...and I think that's where the bias seeped through despite its makers' best intentions. I doubt very much that a Leave-supporting poet and director combination would have gone for such a depressing tone, even if they were trying just as hard to be balanced from the other direction and giving Remain supporters the greater say.

Labels: 'My Country: a Work in Progress'