Regular readers of ITBB will have read Douglas Murray’s piece in the Spectator “Beware the modern-day heretic hunters”, and very likely they will also have read Sarah AB’s post on H.P. and viewed the video and listened to the secretly recorded audio from “that interview” .

This is about the latest kind of denial.  Gender-denial, as espoused by a Canadian uni  professor, described by one viewer of the YouTube video as a “bald something-year-old Canadian (who) sounds like a 19-year old girl from California”.

Gender denial is an extreme interpretation of the non-binary, non-gender-specific politically correct pronoun-related dictum. Thou shalt not offend the trans.

Following this dictum to its (il)logical conclusion requires total deconstruction of the conventional structure of language. It requires you to use the plural for the singular, as in 'they / their' instead of the potentially offensive 'he / she' or 'his / hers'.

It also threatens all those languages that ‘gender define’ inanimate objects.  No more 'le' and 'la', no more gender specific word endings. Come to think of it - life could be a lot easier. No more need for non essential ante-natal scans, for a start. Is it a boy or a girl? Who cares. It’s a they. And feminism, poof! All gone. No more gender quotas. No more all-wimmin shortlists. Bye now, all you socially constrictive constructs that are put there to trip people up.

Do listen to the video and the audio if you’ve got a spare hour or three.
I might have mentioned this before, but some of our oldest, most established utility companies have already transitioned by stealth from relative sanity to gender-fluid pronoun madness. “Your engineer Neil is on their way”.

May I just say that the clip from Canada’s “The Agenda with Steve Palkin” above is utterly bonkers.

To a Brit like yours truly Canadians speak like Americans, apart from the pronunciation of “ou” as “oo”. Everything’s fine  until “about” suddenly becomes “aboot". Then you get the giggles, which interferes with the gravity of the debate and lends a slightly hysterical aspect to it. 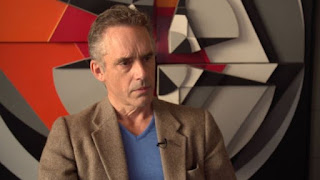 Professor Jordan Peterson, who has been cruelly labelled ‘alt-right’ by the new order, seems to be the only sane person present, but he undermines the purity of his eloquence a teeny bit by the nuclear-level fury that he is obviously struggling to keep a lid on. (And who wouldn’t be?)

The only other contributor who had some sensible observations to make, a convincing-looking trans,  (man-to-lady) all but obliterated her argument with seductive eyelash flutterings and a very distracting palette of simpering, sexually-suggestive lip-pursing gymnastics.

The rest of the debate was almost other-worldly, I thought.

However there is a side, vis-a-vis no-platforming, that needs to be taken very seriously. One way of approaching this question is to cite prime examples of candidates that deserve, indisputably, to be no-platformed, and discuss.  Bringing up topics (or people) that are deemed beyond the pale - Hitler being the most obvious one - immediately shows that it all boils down to a matter of opinion. One man’s terrorist etc etc.
We didn’t like it much when the Labour Party fringe debated “The Holocaust, yes or no”? It seemed utterly offensive and beyond the pale.
Would anyone bother getting worked up about a debate called “Flat Earth, yes or no?”
No, because they’d be confident of a reasonable outcome for the simple reason that the foolishness therein would speak for itself.
But these days, we can’t rely on any such thing.

One little thing that surprised me was that the BBC actually reported the undercover recording incident etc. on their 'US and Canada' page.  (It has now been displaced.) I didn't expect to find anything, but...

“A Canadian university is being accused of stifling free speech after it scolded a teaching assistant for airing a debate on gender-neutral pronouns.
Wilfrid Laurier University chastised Lindsay Shepherd for showing her class a televised debate featuring Jordan Peterson, a transgender-rights critic.
Mr Peterson has gained fame online with the alt-right for slamming "PC culture" and the use of gender-neutral pronouns.
Many in academia have rallied behind Ms Shepherd and criticised the school.”

....I shouldn’t have been surprised at all, as the BBC is ideologically pro trans. The report is brief but fairly accurate, apart from the dodgy bit about the 'alt-right'. (Should the BBC use such elastic terms without including the customary scare quotes ?)  Interestingly, it refers to her as "Ms Shepherd" throughout.

What did surprise me was Sarah AB’s rather pompous criticism of Douglas Murray. I thought he was spot on.