(Not) In praise of Quentin Sommerville - an updated post

I've left the original wholly intact, so you can watch me falling flat on my face! 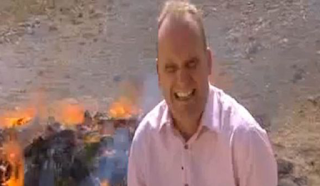 One BBC reporter I do admire is Quentin Sommerville.

Yes, he's typically BBC in his views (as expressed on Twitter), but he strikes me as fundamentally decent and brave.

He's best known, of course, for getting high and laughing uncontrollably while reporting in front of a pile of burning narcotics. (See the attached link!)

His latest 'scoop', however, is a stonking 'exclusive': Dirty Secret, the deal that saved the Islamic State in Raqqa.

All credit to him. 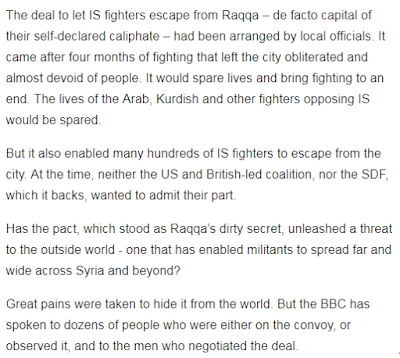 Update: Alan at Biased BBC has a different point of view, and lots of other people have also been responding to Quentin Somerville on Twitter questioning how 'exclusive' this 'scoop' is and just 'secret' this 'dirty secret' was.

If it was such 'a secret' and if such 'great pains were taken to hide it from the world', then why did the BBC itself report it a month ago in its main news report announcing the fall of Raqqa?

And the BBC posted this report on 13 October, just before Raqqa fell, also claiming it as 'an exclusive':


The BBC has learned that local tribal leaders have made a deal to allow the safe passage of the remaining IS fighters who live in the city. In return the Americans would release all the civilians being held as human shields. Meeting with the Americans the elders from Raqqa say the agreement would stop the destruction of the city and save the lives of countless civilians.

The report shows the SDF, the Americans and the Raqqa elders discussing the deal and making no attempts to hide it from the BBC!

And, as Alan notes, the British newspapers at the time (mid-October) were also reporting the 'dirty' deal, eg, this from the Telegraph on 14 October: 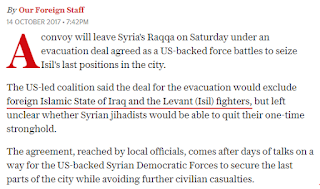 Re-reading Quentin Somerville's report after all of this calls for the complete withdrawal on my part of my 'stonking exclusive' claim. (That will teach me to be so gullible). It appears to be more of a re-hashing of old news for what looks to be sensationalist, self-promoting reasons.

Yes, QS has obtained some exclusive interviews with people involved in the convoy but that's as far as his 'exclusive' really goes, doesn't it?

And that's not what he's claiming for his 'exclusive'. He's claiming something much bigger, that it's about uncovering a 'dirty secret' which lots of people have been desperately covering up.

What is Quentin Somerville playing at? What is the BBC playing at?
Posted by Craig at 06:11