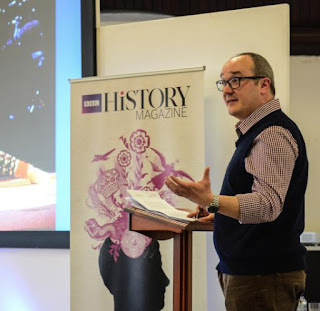 Still on the same tack, here’s the BBC’s populist historian Dominic Sandbrook opining on the Balfour declaration in the Daily Mail.

Here’s one occasion when the Rice-Davies Formulation comes into its own (as applied to the OMG Daily Mail) and I can justifiably cite it myself.
Honest Reporting (shut up, Mandy) has exposed this appalling article by Sandbrook and shows how and why it is littered with falsehoods and revisionist, BBC-type history.

I suspect that many of our readers are bored with this topic so I’ll reproduce Honest Reporting’s deconstruction in full over the page. If you’re one of them, DON’T click on the ‘read more”.

It’s very cheeky that I haven’t asked permission, but I’m flouting blogging etiquette on this occasion because I hope exposing Dominic Sandbrook’s sublime ignorance and ‘putting him right’  goes some way towards explaining the BBC’s bias, or rather explaining why the BBC doesn’t think its bias is bias.

Honest Reporting finishes with the following:

Remarkably the conclusion of Sandbrook’s article is dedicated to supporting Israel and denigrating those, particularly on the far-left, who deny its right to exist and wish to see its destruction as well as the anti-Semites who use the Middle East conflict as justification for their bigotry.

At one point Sandbrook writes: “In Britain, the tragedy of the conflict is often reduced to simplistic statements.”

How sad that he has himself fallen into this trap by making sweeping and inaccurate generalizations, historical statements lacking in context, and even falling for the very propaganda he claims to oppose.

This kind of echoes Rob Burley’s tweeted defence of Andrew Marr’s challenge. By citing egregiously biased sources to bolster his case for the BBC’s impartiality, he kind of reveals more than he intended (and effectively does the opposite.)

Sandbrook purports to be defending Israel’s right to exist, and then cites a string of historical inaccuracies and distortions, which, if believed, effectively demolish the case for the defence.


From here, all non-indented passages are from Honest Reporting.

The Balfour Declaration ignited a firestorm of controversy and violence that saw an entire people — the Palestinians — uprooted from their homes and condemned to life in squalid refugee camps. The Declaration was at once the cornerstone of the Middle East’s most enduring democracy, and the death warrant for a historic nation. For the Jews of Europe, it offered salvation. For the Palestinians of the Levant, it meant disaster.

History should not be hyperbole.

An “entire people” was not “uprooted from their homes and condemned to life in squalid refugee camps.” That Palestinians were displaced is not in dispute. However, as over 1.5 million Arab citizens living in Israel today demonstrates, significant numbers of Palestinians remained in Israel after its independence in 1948.

And those who did not remain? How is it even possible to claim that they all ended up in refugee camps?

As for the claim that the Balfour Declaration was the “death warrant for a historic nation,” this is historical revisionism on multiple levels:

There was never a sovereign Palestinian state. The Arabs living under the Ottoman Empire identified with their tribes and with the wider Arab population of the region, including Syria. Were the Palestinians ever a “historic nation?”

The Balfour Declaration was not the “death warrant” for Palestinians. Having been offered multiple opportunities to have their own state only to reject them, it is misleading to place the entire blame for the situation of the Palestinians on Balfour.

So why did Balfour do it? After all, Britain did not even control Palestine, so he was giving away territory that actually belonged to somebody else.


The obvious explanation is that with Britain fighting the Ottoman Empire, Balfour saw the Declaration as a way to arouse Jewish support.


As historian Jonathan Schneer has argued, Balfour and his colleagues believed in the power of ‘international Jewry’ and were convinced that the Declaration would win them the support of ‘Jewish bankers’ across the world.

Maybe it’s obvious to Sandbrook that the “power of ‘international Jewry'” and the influence of “‘Jewish bankers’ across the world” are myths. However, given that these myths find themselves repeated even today as anti-Semitic tropes in the comments sections of media articles and elsewhere, it would have been sensible to elaborate further why Balfour and his colleagues were so misguided on this point.

Indeed, Balfour himself predicted that the Declaration would make great ‘propaganda both in Russia and America’, which were both our allies in the Great War. But there were three colossal problems. The first, and most obvious, was that somebody else was living in Palestine already: namely, some 737,000 Muslim or Christian Arabs. They had been there for centuries, tilling the land, raising their families and going about their business.

Nowhere in his piece does Sandbrook acknowledge that Jews had lived continuously in the Holy Land for over 3,000 years. Instead, “in the years before the outbreak of World War I, tens of thousands of Jewish immigrants began arriving from Eastern Europe.” Sandbrook essentially propagates the falsehood that Jews were not an indigenous population in the region.

Fast forwarding to the 1930s and 40s, Sandbrook talks about increasing numbers of Jews entering Palestine and how “hundreds of thousands of Holocaust survivors flooded into Palestine” after the end of World War Two.

It is somewhat bizarre that an article holding Britain responsible for historical wrongs fails to mention that it was Britain that was preventing Jewish emigration to pre-1948 Mandatory Palestine. Significant context?

In 1948, under pressure from the Americans, Britain pulled out. The Jewish leadership proclaimed the state of Israel, while four neighbouring Arab countries — Egypt, Syria, Jordan and Iraq — sent in their own armies to help the Palestinians.


The Arab armies were not there to “help the Palestinians” but to wipe out the nascent Israeli state and its Jewish population. That Egypt seized the Gaza Strip and Jordan the West Bank for themselves is ample evidence that helping Palestinians and promoting Palestinian self-determination was the last thing on their minds.

SANDBROOK’S LIBEL
Referring to the 1948 War of Independence, he writes:

Among dozens of massacres, the most infamous came at Deir Yassin on April 9, 1948, where Jewish militiamen shot, raped and mutilated some 107 Palestinian villagers, including women and children.

As the Jewish Virtual Library recounts:

Contrary to claims from Arab propagandists at the time and some since, no evidence has ever been produced that any women were raped. On the contrary, every villager ever interviewed has denied these allegations. Like many of the claims, this was a deliberate propaganda ploy, but one that backfired. Hazam Nusseibi, who worked for the Palestine Broadcasting Service in 1948, admitted being told by Hussein Khalidi, a Palestinian Arab leader, to fabricate the atrocity claims. Abu Mahmud, a Deir Yassin resident in 1948 told Khalidi “there was no rape,” but Khalidi replied, “We have to say this, so the Arab armies will come to liberate Palestine from the Jews.” Nusseibeh told the BBC 50 years later, “This was our biggest mistake. We did not realize how our people would react. As soon as they heard that women had been raped at Deir Yassin, Palestinians fled in terror.”

Indeed, Deir Yassin, where an actual battle took place, has become a staple of anti-Israel propagandists now, aided and abetted by Dominic Sandbrook, whose claim that Palestinian women and children were “raped and mutilated” is a despicable libel.