Mr. Marr's Sunday Morning Service didn't open with the words "Polyphiloprogenitive/The sapient sutlers of the Lord" but with this reassuring homily instead:

Good morning to you. Remembrance Sunday. A day for many of us to reflect on relatives killed in war, but also a day, perhaps, to look around us at the somewhat scary-seeming world we're living in now, and to reflect over many decades past, the outlook for Britain was much, much more perilous.

There was an exciting bit of (pre-watershed) BBC-on-BBC action on the Marr sofa this morning with James 'Scoop' Landale acting as one of Andrew's paper reviewers. I was particularly taken by this exchange, which neatly punctured a line that hardline Remainers are pushing today (via the Observer):

Andrew Marr: James, can I ask you about Northern Ireland? That is another really, really important hard-edge political story today.

James Landale: Really important story, which hasn't been sorted yet.  What I thought was really interesting in this piece in the Observer is just the scale of the robustness of the briefing that the EU... We always forget ...We kind of think that this is just a...that only the Brits brief. Actually the Europeans brief very hard. There's one fantastic quote here where a senior EU official is quoted as saying, "My impression is that this issue of Northern Ireland isn't a priority for the UK". I mean, if I was a UK negotiator, I'd find that deeply offensive. There's also an amazing quote from Sir Andrew Duff, an incredibly powerful pro-European MEP, who accuses...who says that Britain is experiencing "a Weimar collapse", which is overstatement to say the least!

Andrew Marr: Absolutely. There is a lot of very aggressive briefing coming from Brussels, and we shouldn't forget that.

I have to say though that I don't think I've ever thought that "only the Brits brief". I - and I bet you - have never been guilty of "always" forgetting that the EU engages in "very aggressive briefing". I think it's a revealing little insight into BBC thinking that this very obvious thing seems like something of a revelation to James Landale.

Another interesting exchange during the paper review this morning was between Andrew and the Sunday Express's political editor Camilla Tominey:

Camilla Tominey: Well, to be fair, we've always splashed on hard news stories. I know the Daily is sometimes associated with health stories, but we've always gone for the news of the week. Politics is selling for us, and that's really good, and I think we always do the kind of 'Sunday lunch test' when we think what we're going to splash on - what are people talking about? - and I think our readers have felt vindicated by the Brexit vote and want to read more about it. Fisheries is a particularly emblematic story, which is why we put it on the front page today.

By coincidence, I was just thinking that I'd noticed that Camilla herself was being invited onto the BBC more - and certainly more than her recent predecessors. She's been on Question Time and now she's been on The Andrew Marr Show. And I think that's really good.

As for the two main political interviews - with Sadiq Khan and Michael Gove - well, my old interruption coefficients show that Mr Khan (1.0) was interrupted more frequently than Mr Gove (0.8) but my subjective impression is that Mr Gove received the tougher interview.

Michael Gove was questioned on (1) the Green-Left lobby's praise for him, (2) Boris and Nazanin Zaghari-Ratcliffe, (3) Boris again, (4) Brexit, (5) the environment post-Brexit and (6) clean air.

"Are you an Uber man?", Andrew asked Sadiq.

"With respect that is not good enough", Andrew scolded Michael.

"It's part of democracy when we point out democratic mistakes, I would argue", Andrew also reprimanded Michael.

And "Dig for Victory!" Andrew chimed in when Mr Gove was outlining the post-Brexit future for farmers. Hmm.

Of course, no Sunday would now feel wholly complete without some Rob Burley Twitter action, and the Andrew Marr Show editor has been busy again this morning defending his programme from all manner of interesting people.

Yes, I know there's something of old Bedlam (where the public were permitted to laugh at the mad inmates) about my presentation of all of this, but unlike that horrible spectacle from a bygone age, this is actually funny.

And this week's selection features some bonus sane people for good measure.

So please purchase your popcorn and take your seats, ladies and gentlemen. Let's begin!...

Tim Fenton‏: The Sunday Express has a real political editor?
Rob Burley: Yes, she's on the telly.
Tim Fenton: Seen her - just a surprise that the Desmond press needs anyone to edit what they put out.
J-P. Janson De Couët‏: #SackBorisJohnson

jeane macmillan‏: I'm be interested to know how you justify the lack of female representation on the show this morning.
Rob Burley: Hi Jeane - fair point. Last week the opposite was true, just one man. But to an extent we are dependent on who the parties put forward. So I agree, the balance today not as I would have it.

Scott Reid: Almost all of this interview should be on Sunday Politics London.
Rob Burley: Well he is the mayor of London...
Chris Peatfield‏: So please rename Marr to this is London Politics
Rob Burley: Relax, it's not really a problem. I'm sure people outside London care about Trump and Johnson stories.
Craig Duncan: When scripting #Marr s question why not just ask him - “What’s your prepared answer on this contentious issue I won’t press you on?”
Rob Burley: Just a load of old tosh that one Craig.
Craig Duncan: I know you think that… or it wouldn’t happen - but interviewees are being let off with so much. Maybe it’s just the style of the sort of show your bosses want and your hands are tied.
Rob Burley: No, the idea of bosses dictating to me is a fantasy. We ask tough questions and pursue them but we're not rude and hear people out and time isn't limitless.
Craig Duncan: I think that enroute in the cab politicians would view an interview with Marr a breeze while dread an interview with Neil. That’s the difference. However I REALLY do appreciate and respect you not ignoring complaints like mine and others Rob.
[Rob Burley liked.]

Peter Kirkham‏: Met police collapsing in the #CrisisInPolicing. Police stations closing all around. Commissioner  giving unprecedented warnings over more cuts to come... And when @AndrewMarr9 @MarrShow has @MayorofLondon on he doesn't ask a SINGLE question on. Policing! Why not @RobBurl
Rob Burley: Fair point. We had a very short period of time because he was leaving for the Cenotaph.

Rob Burley‏: @Dyson announces new electric car with driverless element. . .
WWICK: Brilliant, fewer unchallenged politicians on #Marr please, more entrepreneurs and business leaders (not associations or federations).
Rob Burley‏: If you think Sadiq Khan was "unchallenged" your telly is on the blink.
.Ah Magners‏: Don’t watch it any more because it’s basically a vehicle to allow Tories to spout their pish unchallenged.
Rob Burley: Pish backatcha. Your telly must be faulty too. Actually watch the show and you will see - as with M Gove today - the challenge is present and correct.
.Ah Magners: Be too much time out of my life I’d never get back. How many right wingers you have on this morning.
Rob Burley: If you can't be bothered to watch - because let's face it you're a massively busy person who just happens to be arising around on Twitter - I can't be bothered to answer your stoopid questions!
Rob Burley: Sorry, I meant "arsing" nor "arising".

Rob Burley: Get your tellies on. ... #marr
Minnie rolfe: I have got my telly on and I'm staggered by the differential, sycophantic tone of #Marr towards tax dodger Brextremist, Dyson compared with his Punch and Judy badgering of @SadiqKhan, can @MarrShow editor check the footage and respond.
Rob Burley: One of them is a politician with a record to defend, the other a businessman hence the tone difference. I note you don't like him, or Brexit, but that's not really how we approach interviews.

Pie Thagoram‏: Again Marr doesnt challenge Gove on £350m "gross" figure, needs to clarify the rebate to viewers
Rob Burley: Oh come off it.
Pie Thagoram‏: sorry Rob, you are reaffirming the view as the Brexit Broadcasting Corporation #unacceptable
Rob Burley‏: I see what you did there. Amazing.

Stewart Lewis: I'm afraid it was as you feared, and a bit worse.  Not a whiff of challenge to Dyson, but strong pushback on Sadiq Khan.  Makes you wonder a bit...
Rob Burley: Makes me wonder whether you missed the Gove interview Stewart. 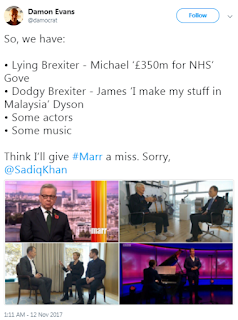 Rob Burley: Wow! You go to a lot of trouble to announce you aren't going to watch #marr and, at the same time, quote the show you say you missed, almost as if you didn't miss it. There are even pictures!
Damon Evans: I took screenshots from the start/line-up of the programme. Switched off immediately after. Gove is enough to put anyone off their breakfast.
Rob Burley: Honest, I put it on, took some screen shots and then turned it off straight away! I think you want to watch it really. Don't fight it.
Damon Evans: Haha. I usually do watch it (and often defend @AndrewMarr9 against the masses who accuse him of Brexit bias). However, I really couldn’t stomach it this morning. Hopefully next week the line-up won’t be as nauseating.
Rob Burley: It's Philip Hammond and John McDonnell? How's the tummy with that?
Damon Evans: Turning.

P.S. The interview with Sir James Dyson is well worth catching up on. As was the Stanley Spencer bit and the closing song. You can't beat a bit of Butterworth and Housman.
Posted by Craig at 13:12