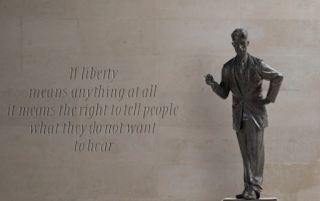 A comment from StewGreen at Biased BBC re the BBC's coverage of the new Orwell statue caught my eye:

They did indeed. The culprit was Amol Rajan, the BBC's media editor:

His concepts of thought crime and newspeak, chronicled here in 1984, the film of his novel starring John Hurt, have evolved into worries about political correctness. He reported on the struggle for independence in Catalonia, which has so violently reared its head in recent weeks. And though he never used the term, Orwell satirised fake news before it entered common parlance. From 1941 to 1943, Orwell worked in Room 101 here at the BBC.

This nugget of historical inaccuracy featured in a report which has been repeatedly broadcast on BBC One and the BBC News Channel since the early evening news yesterday.

There was no 'struggle for independence in Catalonia' during the Spanish Civil War and Homage to Catalonia in no way reports that non-existent struggle. The Catalan republicans at the time had already settled for greater autonomy within Spain.