And has the BBC fact-checked this too? 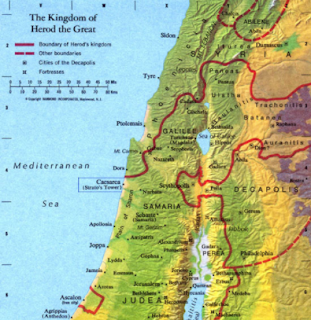 They say, quite rightly, that it's an interesting piece, but they note something peculiar about it: there's a missing word that begins with 'j'.

The BBC piece focuses on the discovery of 2,000 gold coins in the sea near what is now the Israeli city of Caesarea but avoids the word 'Jews', merely (and bizarrely) calling the 1st Century inhabitants of the area "the native people".

Isn't that quite something (he says, putting it mildly)?

I have to say though that Honesting Reporting may only have scratched the surface of the historical perversity of this BBC article.

The BBC piece says that Caesarea was "the capital of Roman Palestine...by 6AD", even though it was actually the capital of Roman Judea at the time. It was only in the 2nd Century AD that Hadrian changed the name of the province from Judaea to Syria-Palestina.

And that's just for starters. The author - one Breena Kerr - also wrote this:

The bit about the city coming under Cleopatra's control "sometime after 96BC" immediately aroused my suspicions as it's suspiciously vague, and Cleo was only born in 69BC.

Plus, I'm not at all sure about Breena's "the infamous Roman emperor" bit. She doesn't name the 'infamous' Roman emperor, and I'm guessing she means Julius Caesar, who wasn't an emperor. Herod the Great actually named it after the actual first emperor Augustus (Caesar Augustus), who - by the standards of Roman emperors at least - was one of the least "infamous" emperors.

Does she actually know what she's talking about?
Posted by Craig at 17:36