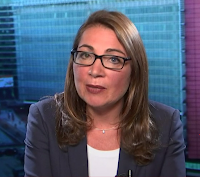 This week's Newswatch saw Samira interviewing Katya Adler. It began with Katya saying that the sense viewers have that "BBC reporting is constantly knocking British negotiators, looking for failure" is "a fair comment to make." Aha, I thought! But, guess what? It's turns out that it's not the BBC's fault. (It never is on Newswatch). Here's a transcript: