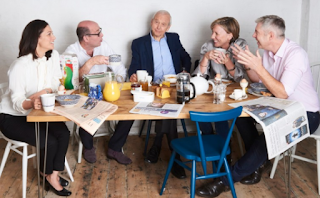 What interested me more about that Radio Times interview with all five present Today presenters was the section on Brexit - one part of the interview that didn't hit the headlines.

(There's no direct link to it as I can see, so the quotes here are taken directly from the dead tree version).

The Radio Times interviewer (Tom Loxley) posed them this question:

Now I have to say I didn't know that Jeremy Vine had made such a disobliging and frankly damning comment about his BBC colleagues over at Radio 4, but there you go. He did.

The reactions from the Today team to this question from the Radio Times weren't all the same.

Sarah Montague and Mishal Husain both straight leaped in, denying it and protesting their innocence, but John Humphrys immediately conceded that Jeremy Vine had a point:

Where Jeremy is right is that there's a disconnect between the people who run the BBC and a large chunk of the population.

He put that down to the BBC's recruitment process which draws in too many people from a similar background. Thus:

...they tend to come with a set of liberal values that permeate their thinking, and therefore the thinking of the BBC - and for a while there's no doubt that the BBC had a strong liberal tinge.

That, of course, implies (as he's said before) that this "strong liberal tinge" is now in the past, but he went on and said something which strongly suggests otherwise:

I noted on the morning of the referendum that in the BBC almost everybody who came in, above all, all the bosses, looked absolutely stunned. And I suspect if you walked into a cafe round the corner frequented by a rather wider mix of the population, there wouldn't have been that same sense of being utterly stunned. They'd have been maybe a bit surprised, but perhaps not even that. I think we sometimes do lose touch with the population.

Nick Robinson wasn't having any of it though. Nor was Justin Webb. They were with Sarah and Mishal in taking the 'Not me, guv. We did just fine' line.

And then everyone (including John) agreed that they all park their personal politics "at the studio door", and that none of them knows how any of the others vote.
Posted by Craig at 15:22