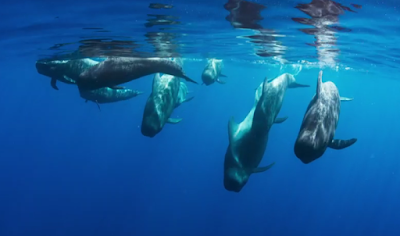 The Times has raised some interesting questions in the light of this week's Blue Planet II.

The scene that captured the public's attention above all this week was the moving scene with the pilot whales and the dead calf. Here's David Attenborough's script for the segment:

Surviving in the open ocean has always tested animals to the limit, but today they face a new additional threat: Plastic. Just over 100 years ago, we invented a wonderful new material that could be moulded into all kinds of shapes and we took great trouble to ensure that it was hard-wearing, rot-proof and virtually indestructible. Now, every year, we dump around eight million tonnes of it into the sea. Here, it entangles and drowns vast numbers of marine creatures. But it may have even more widespread and far-reaching consequences. A pod of short-finned pilot whales. They live together in what are, perhaps, the most closely knit of families in the whole ocean. Today, in the Atlantic waters off Europe, as elsewhere, they have to share the ocean with plastic. A mother is holding her newborn young. It's dead. She is reluctant to let it go and has been carrying it around for many days. In top predators like these, industrial chemicals can build up to lethal levels, and plastic could be part of the problem. As plastic breaks down, it combines with these other pollutants that are consumed by vast numbers of marine creatures. It's possible her calf may have been poisoned by her own contaminated milk. Pilot whales have big brains. They can certainly experience emotions. Judging from the behaviour of the adults, the loss of the infant has affected the entire family. Unless the flow of plastics and industrial pollution into the world's oceans is reduced, marine life will be poisoned by them for many centuries to come. The creatures that live in the big blue are perhaps more remote than any animals on the planet. But not remote enough, it seems, to escape the effects of what we are doing to their world.

The Times reports that the BBC has been accused of "not making clear that it had no evidence linking the calf’s death to plastic" despite having made the dead calf "the main focus of a section of the documentary devoted to marine plastic pollution".

Worse, the BBC's main 'defence witness' has spoken out on behalf of 'the prosecution':

The BBC admitted yesterday that it did not know how the calf had died. It claimed the link to plastic waste had been endorsed by Paul Jepson, a vet specialising in whales at the Zoological Society of London who advised the Blue Planet II team. Dr Jepson told The Times that no samples were taken from the dead calf. He said it could have died from a natural cause or chemical pollutants could have been a factor.

Now it's certainly fair to note that in that large chunk of prose quote above you will find the words "It's possible", whereby the BBC added a two-word note of caution and, thus, gains itself a little scientific respectability...

...how many viewers would have taken them on board having heard the long plastic-focused commentary which surrounded them, spoken in earnest tones by the mighty Sir David Attenborough no less? And especially whilst in the middle of watching something so moving for several minutes (with its emotionally-charged orchestral and choral background music)?

The comments below the Times piece are fascinating. They broadly divide into two camps. The first accuses the BBC of fakery. The second says, yes, it may be fakery but it's fakery in a very good cause - i.e. it's a necessary white lie to promote an urgent message about the damage we're doing to ocean life with our plastic waste.

I'm all on board with the plastics campaign, but this kind of slipperiness with the truth still makes me feel uneasy. I'm not an 'ends justify the means' man when it comes to such things.

Update: There's more on this at The Conversation: It’s great that Blue Planet II is pushing hard on plastic pollution in the oceans – but please use facts, not conjecture. The professor there (who first raised the alarm about the programme) also regrets the BBC's recourse to "fakery".
Posted by Craig at 19:47