A tweet tonight from Guardian columnist (and former political editor of The New Statesman) Rafael Behr...

...crystallises a feeling I've already expressed on this blog about the BBC's reporting (though Rafael himself wasn't specifically talking about the BBC there).

Go back in time to 2015 - and the years before that - and you'll find the BBC pouncing on and making a fuss about pretty much every social media slip made by even the most obscure UKIP council candidate.

Never mind how obscure those UKIP people were, such stories were generally made 'BBC News website front page headline news'.

I think this is serious.

And, of course, it's not just UKIP. Think of the BBC's promotion of the mob attack on Toby Young.

Is this a result of pro-Corbyn bias on the BBC's part? Or old-fashioned general pro-Labour bias? Or is it because they're absolutely terrified of the Corbynistas?

(I suspect the latter).

And given that so many of the recent Labour Party examples involve antisemitism, is it because the BBC doesn't think antisemitism is a serious problem - unlike 'Islamophobia'?

(I suspect that too).

So what will provoke the BBC into giving Jeremy Corbyn's Labour Party the same treatment it used to give UKIP?

And the extraordinary story of Jeremy Corbyn and the antisemitic mural is now raging online this evening, with Jeremy Corbyn's responding and even Boris Johnson and the BBC's Laura Kuenssberg getting involved (on Twitter), but the BBC News website is (so far) staying clear.

Well-known Labour MPs - from Luciana Berger to Lisa Nandy to Harriet Harman - are piling in.

It will be very interesting to see if, especially with Laura K involved, BBC One's News at Ten covers the latest intense outburst of antisemitism accusations against Jeremy Corbyn (Labour leader, possible next PM).

Already one of the BBC's finest is registering his alarm (and, note, he's leading with the 'Labour voters' "instincts" on Brexit - meaning those Labour voters who voted Remain):

Interesting times, alas. What to make of them? What will happen next?


Update (21:42): Oh, a small print article has just popped up on the BBC News website's front page below the main headline. It appears to have been published 15 minutes ago.

It's prominently placed but so small that you'd easily miss it: 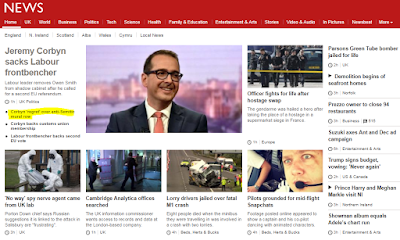 Update: 22:22: Yes, BBC One's News at Ten did mention the antisemitic mural row. John Pienaar alluded to it, in passing, in a piece about Owen Smith's sacking. The mention was short, easy to miss and context-free and, thus, so cryptic that I suspect hardly anyone listening to it would have had much of a clue as to what the mural story was about.
Posted by Craig at 19:57