Here's part of The Andrew Marr Show's own transcript of that interview with Tom Watson: 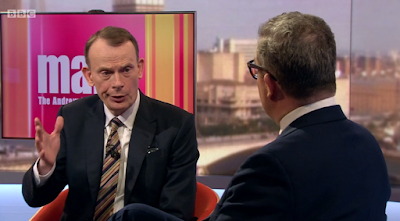 AM: Some people suggest that the Owen Smith sacking was an attempt to deflect public attention. Can I ask you to look at this? 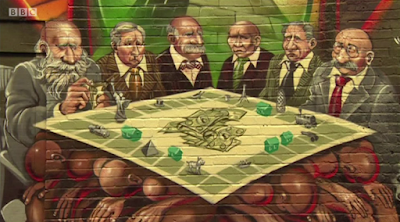 What is your reaction when you see that image?
TW: My reaction is that is a horrible anti-Semitic mural that was rightly taken down.
AM: And how long did it take you to glance at that and to make that judgement?
TW: Well, look, you’re showing it me on a 32-inch screen on national television and I’ve seen it about a hundred times on social media. Very different to seeing it on Facebook when you’re on the move.
AM: Because your leader, who apparently glanced at it, didn’t look at it properly and suggested to the guy who written in that it shouldn’t be taken down. He said, I quote, ‘some of the older, white Jewish folk in the local community had an issue with me portraying their beloved #Rothschild or #Warburg as the demons they are.’ And he said it was being whitewashed and taken down, and Jeremy Corbyn said, ‘why? You’re in good company, Rockefeller destroyed Diego Rivera’s mural because it includes a picture of Lenin.’ Which seems a remarkable thing to say. You’ve only to glance at that to see what it’s about. It’s Third Reich propaganda anti-Semitism.
TW: Well, look, that is why Jeremy has expressed deep regret and apologised for that, and has actually said that it’s right that the mural was taken down.
AM: And yet, you know, it’s taken years for some of your colleagues to get him to respond to this. Luciana Berger, who’s a Jewish Labour MP, has been trying to get a response out of Jeremy Corbyn for a long, long time and she’s still very, very upset that he has not completely, fully apologised for this.
TW: Well, I’m very, very sorry that people feel hurt by this, and that’s why I think it’s right that Jeremy has expressed regret for it. He said that he didn’t see the mural, he was talking about free
expression, and I think you know, now that he has seen the mural he’s right to say that it was right not just to be removed but that he expresses deep regret for the offence caused by the mural.
AM: He regrets not looking more closely at it. Can I suggest to you that if this was a mural attacking black people or any other ethnic group then nobody in the Labour Party would have the slightest hesitation about condemning it.
TW: Well, nobody in the Labour Party should have the slightest hesitation in condemning this mural. It’s anti-Semitic, it’s horrible, and I want Jewish members as well as every other member of the Labour Party to feel welcome in our party. I think it’s time we said that enough is enough on these anti-Semitic stories, and we are taking measures to do that. You know, we’ve increased our staff that do these investigations. We’ve had the Chakrabarti Report. We worked with our affiliated organisation, the Jewish Labour Movement, to redefine anti-Semitism at our conference last year.
I understand the concern out there.
AM: Do you agree with Chris Williamson that what’s going on is the weaponising of anti-Semitism?
TW: No. No, I don’t agree with that at all. But what I do think is we’ve got to work harder to stamp out anti-Semitism, and that requires our own internal procedures to be faster in the way they
operate and deeper. But all I can say -
AM: These allegations carry on. Every few weeks there’s another anti-Semitic row involving the Labour Party. It seems to be something that you can’t shrug off or slough off. Is this not the moment for you and for Jeremy Corbyn to go and meet the Chief Rabbi and talk it through and explain your position and start to try and get this behind you? Because if it goes on till the election you’re in dead trouble with Jewish voters.
TW: Well, I’m very honoured to have already me the Chief Rabbi and discussed this. I’ve spoken at our Labour Friends of Israel lunch, I talk to the Jewish community regularly. I talk to colleagues who are concerned about this.
AM: What about Jeremy Corbyn?
TW: So let me say it’s time we stamped out anti-Semitism and we’re doing so. We’ve increased our resources to investigate these individual cases. But you know, we’re a member-led party, we need to make sure that we investigate these things thoroughly to make sure justice is done.


.....
(doubtless after someone shouted down his earpiece)

AM: Okay, before I finish I should say that that quote I read out from the artist about his mural was not the one that Jeremy Corbyn saw, he just saw the image.
Posted by Craig at 16:42