It's that time again!


This morning's The Andrew Marr Show was thoroughly enjoyable.

The paper review was feisty. One of the reviewers was the brave investigative journalist/partisan conspiracy theorist/Marine le Pen-lookalike Carole Cadwalladr. That, of course, could be seen as the BBC helping to push her Cambridge Analytica/anti-Brexit agenda were it not for the fact that Isabel Oakeshott was chosen as the other reviewer and took her to task with considerable vigour. Andrew Marr himself also put some good counter-points to Ms. Cadwalladr.

Naturally, this didn't go down too well with some: 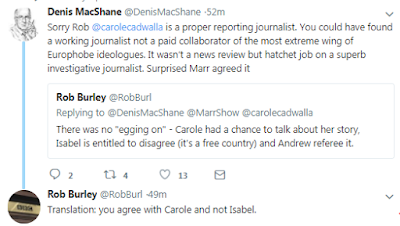 The fact that Carole Cadwalladr was followed by Caroline Lucas of the Greens could also be seen as the BBC helping to push the same Cambridge Analytica/anti-Brexit agenda but, fair play to Andrew again, as he very persistently pointed out the holes in her case and mocked her claim that her 'people's poll' wouldn't be a 'second referendum'. Indeed, I was struck by just how sceptical Andrew Marr sounded about the value of the Cambridge Analytica story per se. (If he was just playing devil's advocate, he was playing it very well).

The Tom Watson interview was particularly pleasing. Andrew was splendidly persistent on the issue of antisemitism in the Labour Party, especially over Jeremy Corbyn and that mural. According to Mr. Watson Jeremy Corbyn can be excused over the mural because he didn't see it on a large enough screen! I also had to smile because my timeline had a couple of of my favourite Twitter people harrumphing in advance that Andrew Marr wouldn't ask Mr. Watson about Max Mosley and whether he'd be handing back the dosh that Mr. Mosley gave him, but Andrew did ask Tom Watson about that and gave him a pretty decent grilling over it too. Mr. Watson's ingenious defence line for why he won't be giving Max Mosley's £500,000 donation back was because it's already been spent!

As for the interview with the ill-looking David Davis ('ill-looking' because he was actually ill), well, that was a interesting, probing interview too.

And there was The League of Gentleman too.

No music again though.

As you can see, Rob Burley has been busy. Here's a little more Rob action: