Looking at my Twitter feed just now and seeing a tweet from our old friend (and blogging associate) DB....

...led me to look for a BBC News website report, published within the last hour, headlined Oxford men guilty of sexual exploitation 'on a massive scale'.

Thanks to Google, I found it.

As so often, Islamic names are the common factor in such paedophile gangs (and, yes, the girls were aged 13-15 when the abuse started).

Following an all-too-familiar pattern, however, this story isn't presently on the BBC News website's front page, despite being first published nearly an hour ago.

You will find it on the BBC's UK page though: 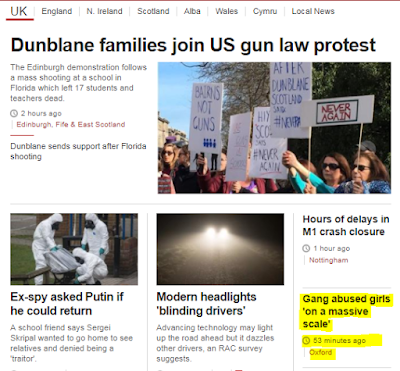 ...though for how long only time will tell.

The top-rated comment at Mail Online, which reported this story a good hour or so before the BBC, seems to reflect an increasingly widespread cynicism about the BBC when it comes to their reporting of these kinds of story:

So will it be a main story on the BBC's main TV and radio bulletins this evening? Or will the BBC's James Stephenson get spooked into defending the indefensible on both Newswatch and Feedback again next Friday after yet another public outcry?#