Just a few more thoughts on this morning's Andrew Marr show - each one no doubt a pearl fit for inclusion in John McDonnell's Little Red Book... 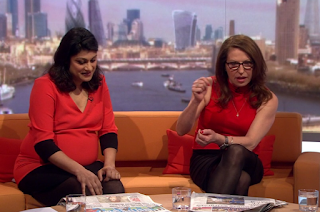 "And this is a tangerine dream, beautifully coordinated", quipped Andrew Marr.

And talking of quips, Andrew made one at the expense of John McDonnell.

Good morning. I was reminded this week of something Lenin said: "There are decades where nothing happens; and there are weeks where decades happen." It's been one of those weeks - the Donald and Little Rocket Man making nice, a chilling return to the Cold War at home, and a new stand-off between the British Government and Brussels over the very future of The City. As time seems to accelerate, how much can we pack into the next hour?.....Now, I've quoted Lenin already. I wonder whether John McDonnell, the Shadow Chancellor, who's in Dundee, can top that when he speaks to us later on.

Mr. McDonnell gave a weary smile at that one.

*******
And Shakespeare's Julius Caesar and Mark Antony are "swaggering populists", according to Andrew Marr:

Shakespeare's Julius Caesar has always been popular but it really seems to be speaking to today's politics. With its knife-in-the-back plots, an out-of-touch elite and rabble-rousing demagogues, this is not simply a history play.


Quite a few people on my Twitter timeline were hoping before the show that Andrew would raise the question of Jeremy Corbyn's involvement with an antisemitism-heavy Facebook group, and others expressed this disappointment after the show that it wasn't raised. This story really doesn't seem to be anywhere near the front of the BBC's collective mind. It's a far cry from the days when every social media faux pas by even the most obscure UKIP councillor or candidate would be 'home page' news for the BBC, but the leader of the Labour Party being involved with a Facebook group full of Jew-haters and Holocaust deniers is apparently no big deal.

Rob Burley, now the Executive Editor of the programme rather than its mere Editor, has been responding to some of the incoming flak, as usual - eg:

Eden: Two women doing the papers and @AndrewMarr9 calls them chaps. #everydaysexism
Rob Burley: I think he was kidding around. Is kidding around allowed?
Eden: No mate it fell from his lips without thought, perhaps he should think a bit before doing away with women on TV again
Rob Burley: Confused by how having two women reviewing the papers is doing away with women but ok.
Eden: Calling them chaps mister as in not bothering refer to them as women but choosing to refer to them as men. Do you get it now? Do please keep up.

ally: #Marr continuing his campaign to ensure that opposition MPs have limited access to broadcast media
Rob Burley: By booking them on his very popular television programme?

PamCrossland: Ironic that Andrew #Marr refers to RT as a Russian Propaganda vehicle when he works for the BBC.
Rob Burley: Not really. Not at all. Not remotely.

He's yet to reply to questions about the purpose of having Alexander Litvinenko's widow Marina on the programme and concerns about Andrew Marr failing to ask John McDonnell about Jeremy Corbyn's involvement with that Facebook group. Maybe he'll get round to them eventually (if he's not off to watch the football or listen to The World This Weekend instead.)

There was no time for any music today, so to make up for that here's Mussorgsky's Coronation Scene from Boris Godunov sung by the great Russian bass Boris Christoff. The opera concerns Boris Johnson's taking over of the Conservative leaderships after the fall of Theresa May. The opera asks: Is Boris good enough?