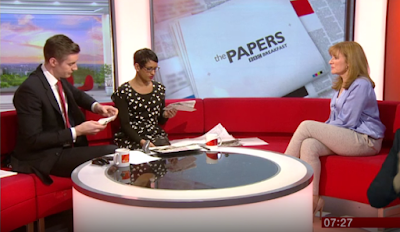 There's a 'good news story' for bricklayers and plasterers in today's Sunday Express:

Construction jobs BOOM: Bricklayers and plasterers earn MORE than architects
THE AVERAGE bricklayer earns 10 per cent more than the typical architect, according to research. A poll by the Federation of Master Builders (FMB) found that brickies earned £42,034 on average compared to £38,228 for architects across the UK.

Floorers, scaffolders and plasterers also earn more and one firm was paying London bricklayers £90,000 a year.
FMB chief executive Brian Berry said: “Money talks and, when it comes to annual salaries, a career in construction trumps many graduate roles.
“The average university graduate in England earns £32,000 a year, whereas your average brickie or roofer is earning £42,000 a year across the UK.
“Pursuing a career in construction is therefore becoming an increasingly savvy move.”
Plumbing is the most lucrative technical trade with average earnings of £48,675 a year, followed by electricians (£47,265), civil engineers (£44,253), steel fixers (£44,174), roofers (£42,303), bricklayers (£42,034), carpenters and joiners (£41,413), plasterers (£41,045), scaffolders (£40,942), floorers (£39,131) and plant operatives (£38,409).
According to the Office for National Statistics, architects earn an average of £38,228 per year, followed by painters and decorators (£34,587) and general construction operatives (£32,392).
The Government is seeking to create parity of esteem between academic and technical education and to create a technical education system that “rivals the best in the world”.
Julie Hyde, director of vocational qualifications specialist CACHE, said: “Technical education is vital to ensuring that we have the skilled workforce this country needs for the future.”

This very article was discussed on BBC Breakfast's paper review this morning, and just see - from the following transcript - how the BBC presenter manages to turn it in a ' bad news story' about Brexit:

Ben Thompson: A story here, not sure what paper it's from, "Bricklayers and plasterers earn more than architects". This is something we have talked about a lot on the programme...
Naga Munchetty: It's the Daily Express.
Ben Thompson: ...certainly in the business section of the programme, the fact that skilled labourers, skilled workmen, are in really short supply right now.
Angela Epstein: Yes, this story suggests that bricklayers are paid 10% more than architects. Architects are a member of the educated classes, they are a professional organisation, you spend seven years at a university for it, a particularly long course, and the idea which is we want esteem and parity between the so-called white-collar professions and the more technical or hands-on professions. I think the problem's happened because there's a 'university for all' policy now and everyone wants to go to university, even if it's to do Golf Studies at the University of Nowhere, when actually it's better to tell our young people being academic is not the one size fits all approach. Take an apprenticeship, use your hands. I will pay anything if I need a plumber in the middle of the night.  It's unlikely I will need an architect in the middle of the night.
Ben Thompson: And there have been warnings as well that changes to immigration rules after Brexit could make that problem even worse.
Angela Epstein: Yeah, absolutely, it may well be exacerbated by a certain skills demographic that disappears but I don't think that parent should feel they are shortchanging their children by not encouraging them to go to university.