It probably pays to monitor such things more closely than we do, so I don't know whether this is rare or not, but old, white, male Sir Vince Cable got a BBC News website write-up today that he could surely have only dreamed of getting.

The BBC just reported his speech without criticism or contrary points and quoted him at length under the headline Brexit: Older Leave voters nostalgic for 'white' Britain, says Cable.

It's over to Twitter and the Guardian's John Harris, I think, to deliver the appropriate response to Sir Vince: 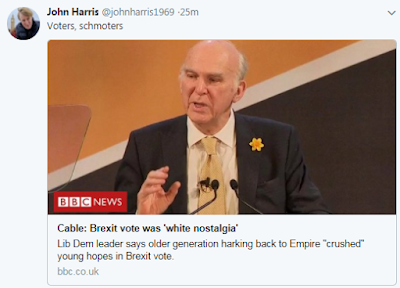 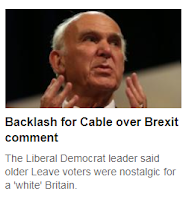 And who has this backlash come from? From "Tories", that's who!:

Further update: 'Bonkers' complaint from the other side: