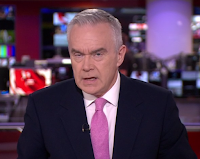 The Telford story finally made it onto BBC One's News at Ten last night, at 10.25 pm...

Let's have a look at some of the day's other news stories now then: The leader of Telford and Wrekin Council in Shropshire is calling on the Home Secretary to order an independent public inquiry into cases of child sexual exploitation in the town. It follows reports claiming that hundreds of girls may have been abused in the town since the early 1980s.

That was it in its entirety.

Update: The story is actually on the BBC News Home page today:

The chosen angle is that West Mercia Police's Superintendent for Telford & Wrekin, Tom Harding, has claimed that the Sunday Mirror's story has been "sensationalised" and that the offenders aren't predominantly groups of 'Asian' men.

Further Update: One BBC programme has covered it though ('watertight oversight'), and its editor has a 'Gotcha!' for the Daily Mail: 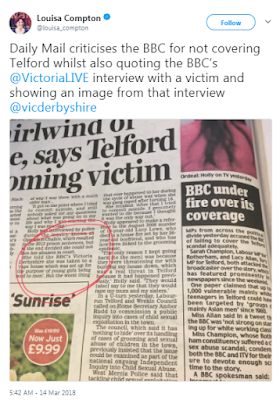