From my social media reading I know that plenty of people think that white farmers in South Africa are in danger of their lives and their livelihoods, and that a Zimbabwe-style persecution is starting there.

It's not a story that the BBC has been particularly interested in but it's certainly caught their attention today.

Why? Because Australia has said that it might provide visas for white South African farmers to help them escape that "persecution" - a move you could bet your bottom euro that the BBC would strongly disapprove of.

And disapprove it quite clearly does.

The BBC News website report about it today puts the South African government's dismissal first and, very strikingly, uses this as its halfway sub-headline:

Note that it isn't even in quotation marks.

And then the BBC then lays out its own opinion (including a Reality Check ruling) under that very headline: 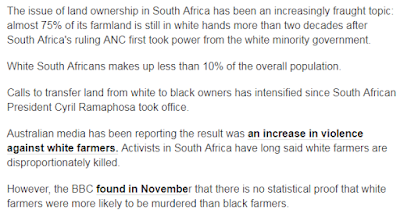 So that's the Australian government told!

Again, even the Guardian is far less judgemental than the BBC here.
Posted by Craig at 17:14