A Tale of Two Stories You may have read BBC Technology correspondent Dave Lee's BBC News website report Facebook suspends controversial data firm Cambridge Analytica yesterday, or the Home page report on it yesterday evening headlined Trump campaign data firm accused of harvesting Facebook data, or even the write-up about The Observer's front page story about it on James Stephenson's favourite page of the BBC website, The Papers, this morning.

Or if you were watching BBC One's The Andrew Marr Show then you'll have seen it discussed by Owen Jones and Jane Moore, and Andrew Marr ask Boris Johnson about it. 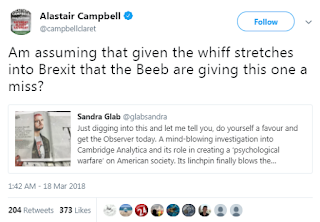 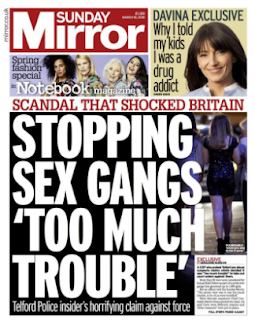 Meanwhile, the Sunday Mirror's latest front page headline - Stopping Sex Gangs 'Too Much Trouble' - Telford Police insider's horrifying claim against force - has been "given a miss". Once again, it wasn't even shown on The Andrew Marr Show, never mind mentioned or discussed.

That said (just like last Sunday), it is, however, mentioned on James Stephenson's favourite page of the BBC website, The Papers, and BBC Breakfast interviewed the National Lead for Child Protection, Chief Constable Simon Bailey, who seemed particularly keen to tell us not to focus on the "Asian descent" grooming gang aspect of the story but to think of child abuse as being a much broader phenomenon and one that mostly takes place in the family home. I'd have hoped that Naga would have put the remarkable claims in today's Sunday Mirror about police attitudes in Telford to Mr. Bailey but, alas, she didn't.
Posted by Craig at 11:09