To believe or not to believe, that is the question... 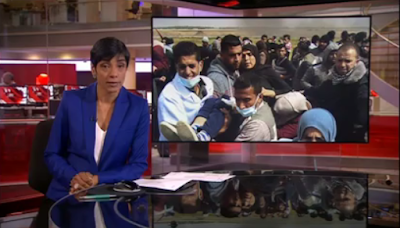 Ah! Israel was the second story on this evening's main BBC One bulletin, and it was classic BBC stuff.

I watched it with rolling eyes.

I drafted a post giving it a long-winded fisking but then decided against it. Something shorter will do it justice.

Yes, it began with the usual 'people are being killed by Israel' angle:

The Health Ministry in Gaza says that at least 13 people have been killed by Israeli security forces along the Israel-Gaza border.

and cited as its source "the Health Ministry in Gaza" - which is, of course, Hamas-controlled (not mentioned by the BBC here).

Did the BBC fact-check their claims?

And, yes, Yolande Knell did much of the familiar BBC stuff in her commentary, with talk of "family entertainment" from those protesting Palestinians and cryptic language about "a call for peaceful marches" (somehow) turning to violence, accompanied by such turns of phrase as "A chaotic rush to the hospital, with hundreds of Palestinians injured in Gaza".

And, yes, of course, there were those old BBC favourite, "Israel's military says" and "But Israel says".

But the funny thing about this was that I first watched this BBC report without sound and just looked at the images broadcast by the BBC, and what I saw was the kind of thing often described as "Pallywood'.

It may have been real, but it looked unreal, and almost like propaganda.

Had the BBC checked its authenticity?

It started with three scenes of large number of Palestinian men rushing with men on stretchers. (Real? Fake?) The Israelis were shown as menacing military figures silhouetted in the distance with brave Palestinian figures standing alone against them. Crowd after crowd after crowd of (military-aged) men were shown ducking and running as they fled the Israeli response. Another man was shown on a stretcher.

And, seriously, straight after the calm-looking/complacent-looking Israeli soldier featured 'for balance', there was shown a young boy leading the crowd with a Palestinian flag (like Liberty leading the People)!

And then more Palestinian men were shown running from the Israeli response.

Who filmed these images? If it wasn't the BBC, where did the BBC get them from? Did the BBC verify them?

It's a terrible thing when you feel that you can't trust your nation's leading broadcaster, but I certainly didn't feel at all confident about the fairness or the honesty of this report.

And, as we know, such things seriously matter.
Posted by Craig at 23:15