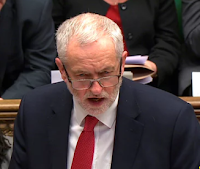 Whether you think that Jeremy Corbyn disgraced himself today by siding with Russia against his own country or that Mr. Corbyn was right to question the intelligence regarding Russian links to the attack on Sergei and Yulia Skripal and urge caution and moderation, it's not in dispute that his comments in the House of Commons this afternoon went down very badly - and just as badly with much of his own party and other opposition parties as they did with the Conservatives.

The weird thing is that the huge hostility to his remarks is getting huge coverage everywhere other than at the BBC News website.

From Sky News to ITV News, and from the Guardian ('Jeremy Corbyn under fire over response to PM's Russia statement') to the Telegraph ('Disgraceful!' Anger in the Commons over Jeremy Corbyn's response to Theresa May's statement on Russia), the onslaught against the Labour leader is big news - and has been for two to three hours.

The BBC News website report on the debate in parliament - its second story (behind Stephen Hawking) - is a piece I've followed the progress of all afternoon. Bafflingly, up until a few minutes ago it didn't even mention Jeremy Corbyn.

That was why I first began writing this post a few minutes back. I was going to say how odd it was and then speculate, in true ITBB fashion, about whether the BBC was helping Jeremy Corbyn by downplaying the fury of his own party at his remarks or being rude to him by completely ignoring him, but, since beginning writing this and after refreshing the BBC page, I see that the BBC has now added a couple of paragraphs:

Labour leader Jeremy Corbyn was jeered by Conservative MPs as he asked Mrs May how she had responded to requests from the Russian government for a sample of the nerve agent so it could run its own tests.

He condemned the Salisbury incident as a "dreadful, appalling act" and called for multilateral action in response, saying it was a matter of "huge regret" that the UK's diplomatic network had been cut by 25% in the last five years.

That, I think, firmly settles the matter.

The BBC - unlike pretty much everyone else - is presenting this as a case of Jeremy Corbyn saying something and only getting a hostile response from the Conservatives.

This is frankly beyond bizarre. Labour MPs have been falling over themselves this afternoon to signal their profound disagreement with their leader. They've been publicly siding with the Government in the House of Commons. To present this as just some 'jeering' Tories responding to Jeremy Corbyn's attacks on Tory cuts is terrible reporting.

Not one else - not even the Guardian - is behaving like this. What is the BBC playing at?

Update (17.40): As pointed out in the comments below, the BBC has a new report about this now which finally reports the reaction to the Labour leader's remarks by other Labour MPs:

What on earth took them so long? Were they stung into it by criticism?

As that headline suggests, it does so from the starting point of Mr. Corbyn's point of view:

Only in the fourth paragraph does the fact that Labour MPs have been heavily criticising Mr. Corbyn begin to appear.
Posted by Craig at 16:40