The article underneath the main story on the BBC News website has now been nudged aside to make way for a new report about Telford, which is now the BBC's 'second story'. Very curiously, the piece was published 5 hours ago, presumably on the BBC 'Shropshire' page, but has only appeared on the BBC's Home page now. Why? 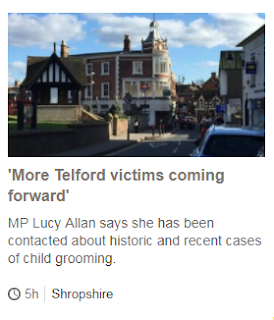 It looks to me as if the BBC is now making an effort to appear to be doing the right thing. Maybe all the criticism is finally getting to them (especially if it's now coming from MPs).

The report itself, incidentally, has just changed - within the past ten minutes. I clicked to refresh the page and the third paragraph in the previous version, "Police have previously disputed suggestions the issue is ongoing", has been replaced by "Police said they were currently working with about 46 people at risk of CSE". (Newsniffer caught the edit too).

Update (12.20): Following on from a post yesterday, the article has been edited again and now contains the following passage:


West Mercia's Police and Crime Commissioner said he had "sought clarification" on reports that a memo by the force in 2013 said some child sexual abuse victims had "consented".

The wording has been criticised in the Mirror for appearing to blame victims, and PCC John Campion has said he thinks it was a "poor choice of words".

Mr. Campion, incidentally (and not reported in this BBC article), was one of the ten men who told Amber Rudd that no inquiry into Telford grooming was necessary (according to Lucy Allan).

It lasted three hours then.
Posted by Craig at 09:42