Watching The Sunday Politics, something struck me as I noticed Sarah Smith asking much the same question to her Labour guest as Andrew Marr had asked earlier, namely that they both got similarly-worded reply each time:

Sarah Smith: But the other thing which is not a first is a member of Jeremy Corbyn's Shadow Cabinet saying that we should have a second referendum, Diane Abbott had sent a letter around her constituents in Hackney where she said she would argue for the right of the electorate to vote on any deal which is finally agreed?
Andy McDonald MP: And I think the difference is that Diane Abbott has said that that was clumsily worded, that is not her position.

Both Sarah and Andrew left it there, but if you see the letter... 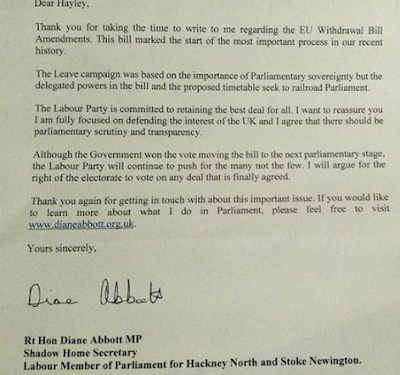 ...you'll see that it's not "clumsily worded" at all. It couldn't actually be any clearer. Those Labour shadow ministers are telling an untruth. (Yes, I know! Shocking, isn't it?)
Posted by Craig at 13:28