Back in Time for Bias 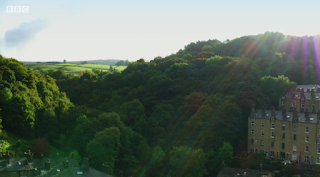 Richard Littlejohn may not be everybody's cup of tea (though I'm partial to him, especially if served with milk) but about BBC Two's cookery-based historical 'reality' show Back in Time for Tea he's absolutely bang on the mark.

His piece is headlined It's always grim Oop North on t'BBC... RICHARD LITTLEJOHN says new TV show Back In Time For Tea never misses a chance to bash the Tories, and his description of its latest episode is precise and correct.

As RJ says, the series features a typical family from Bradford, who are transported back in time to experience life in different decades of the 20th century, and it has a political edge. This week's episode took us to the 1980, where....

Dad was transformed into a striking coal miner and Mum was told she was losing her job as a dinner lady because the Tories had privatised school catering.

As the strike, which began in 1984, progresses, the family’s car, sofa and washing machine are all repossessed because they can’t keep up the repayments.

Mum goes to the cupboard, but there’s nothing there, save for a mouldy old loaf and a symbolic bit of hard cheddar. We’re talking Old Mother Hubbard here.

Despite the hardship, Mum explains to the children that it’s worth it because they’re ‘taking a stand’ against the wicked Tories. The kids are encouraged to wear ‘Coal Not Dole’ lapel badges.

Fortunately, help is at hand in the form of food parcels from the Soviet Union. The family is saved from starvation by tins of beans from Hungary and beef from Russia.

As Richard Littlejohn says, you couldn’t make it up....

.....and he hasn't. Here are just a couple of transcriptions from the programme to prove it:


John, job wise, you're back down t'mine. You're miner. You're in for a bit of a bumpy ride with the '80s. There's a divide going on, like you've not seen since the 1930s. Lesley, terrible news for you sweetheart. You've lost your job. Your role as a dinner lady is gone. Instead, a school canteen has been replaced by a sort of, like, help-yourself cafeteria, and it's been outsourced to a private company.

Dear Ellises, it's all change in 1984, I'm afraid. John, you are working at one of the mines threatened with closure and are now on strike. National strike pay is £15 per week. You may have noticed your car, sofa, freezer, and washing machine have disappeared.

The voiceover states that in the Eighties, Britain was more divided than at any time since the Thirties. Soup kitchens popped up in Bradford for the first time in 60 years.

An ex-miner was wheeled on to declare, with tears in his eyes, that he’d do it all over again. (Cue the Brighouse and Rastrick brass band.)

What’s utterly lacking is any pretence of balance, either political or historical. Viewers are informed that the strike was over the closure of coal mines, including the one where the Bradford Dad allegedly worked.

That’s not strictly accurate. By the Eighties, there were no pits open in the Bradford area. The last one on the outskirts of the city closed as long ago as 1950, under Clement Attlee’s Labour government. In fact, far more mines were shut down under Labour than the Tories. This inconvenient truth is conveniently ignored. So when the ex-miner says he was fighting for the jobs of future generations, it’s a fantasy.

Coal was dying long before Thatcher entered Downing Street in 1979. The pits would have closed anyway. All the strike did was hasten their demise.

What viewers were not told, either, is that miners’ leader Arthur Scargill called the strike without holding a national ballot and enforced it using violent flying pickets.

It was never about saving coal mines, it was about bringing down a democratically elected Conservative government. There was revolution in the air.

The one bit where I disagree with the man from the Mail is over when the last coal mine in the Bradford area closed. According to everything I've read on Google, the last one (Bradford Colliery) was closed as "uneconomic" in 1968 under Labour's Harold Wilson.

But, yes, he's not wrong that it was Labour who closed down the last coal mine in the Bradford area and that there were none left for Mrs Thatcher to close down when the 1980s came.

So, the BBC is indeed, at the very least, playing fast and loose with the truth in its depiction of the 1980s (as far as coal mining is concerned).

And, yes, this programme was biased.
Posted by Craig at 19:35

Labels: 'Back in Time for Tea', Richard Littlejohn