Who's in the dock?

Further to yesterday's post speculating that the one thing that might provoke the BBC into giving Jeremy Corbyn's Labour Party a really terrible press would probably be something Brexit-related rather than anything antisemitism-related, well, Jeremy Corbyn's sacking of the pro-EU Owen Smith for backing a second EU referendum looks to be just the sort of thing.

The BBC News website had a main report about it last night that was initially heavily stacked with defenders of Owen Smith and critics of Jeremy Corbyn. The last of the article's five versions, published some two-and-a-half hours after the first, toned the bias down considerably by adding Diane Abbott's comments near the top of the article. 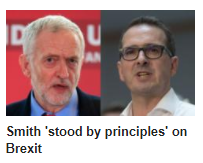 This reverts to the heavy bias of the first four versions of yesterday's article giving Mr. Smith and the Corbyn critics (Chuka, Lord Hain, Anna Turley, Ben Bradshaw) the first 13 paragraphs of the article and demoting poor old Diane Abbott to its 14th paragraph.

P.S. I think it's only right to lift this comment from the Open Thread and add it to this post, as it's highly relevant - and I agree with it: