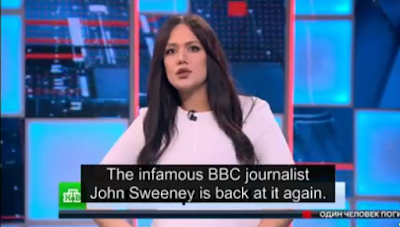 Well, I must say that I found John Sweeney's Panorama: Taking on Putin a gripping watch. It was almost like a Cold War spy drama at times.

It build a strong case that Russia is a sham democracy and  a police state - something we already knew, of course, but it was eye-opening to see just how thuggish and ruthless it actually is.

It was a distinctly Orwellian moment when the BBC crew (including JS) got arrested for vandalising a memorial to murdered opposition leader Boris Nemtsov when we viewers knew (and can be sure that the Russian authorities also knew) that a pro-Putin group had carried it out and that the BBC had merely been there filming them.

As he himself writes in the Times:

While helping police with their inquiries, a story about me popped up on REN TV, a network that is said to be close to the FSB. The website said that I may be charged with vandalism for the attack on the Nemtsov shrine. I had once met Nemtsov, a brave and very funny critic of Putin. I dedicated my novel about modern Russia, Cold, to him. The idea that I would vandalise a Nemtsov shrine is nonsense.

(Sarcasm klaxon! - If there's one thing you can say for BBC reporters such John Sweeney is that they'd never leap to unjustified conclusions and smear people they disapprove of - and I'm sure Nigel Farage would back me up on that one).

Still, this Panorama could be taken as a warning to all democracies - sham or otherwise: A true democracy doesn't harass journalists. It doesn't follow them, or smear them, or arrest them on jumped-up charges...or, for that matter, refuse them entry into the country because they hold 'the wrong views', or detain them because they intend to interview someone of whom the authorities disapprove.