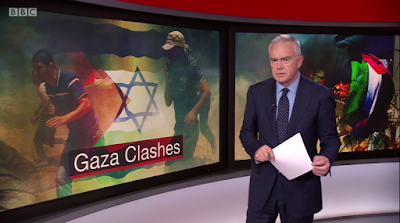 Newsreader: Tonight at Ten: More funerals in Gaza for the Palestinians killed in the deadliest day of violence there since 2014. As the burials go ahead for those shot dead by Israeli forces, the UN condemns what it calls the "appalling deadly" events. We report on the hospitals under pressure in Gaza, as the international community calls for an end to the violence.

We'll have the latest from Gaza, and on today's emergency meeting of the UN Security Council.

Newsreader: Good evening. More funerals have taken place for the Palestinians killed by Israeli troops in Gaza yesterday. An emergency session of the UN Security Council has heard condemnation of both Israel and the militant group, Hamas. Today marks the 70th anniversary of what Palestinians call the Catastrophe, when hundreds of thousands of people fled, or were expelled from their homes, when the State of Israel was established. Our Middle East editor, Jeremy Bowen, sent this report from Gaza. His report contains some distressing images. 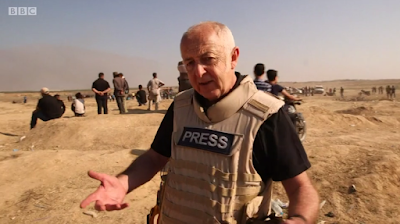 Jeremy Bowen: On the border the soundtrack was anti-Israeli songs, not gunfire. 24 hours after the killing, the big protests have stopped, but tyres were burning and Palestinians looked warily towards the Israeli positions. Enterprising traders brought refreshments. So what's next? The Israelis deal with the international political fallout; the Palestinians have 60 dead. Politicians and diplomats abroad call for peace, but real peace talks ended - failed - a long time ago, and with the current generation of Palestinian and Israeli leaders, there is no chance of them being revived. The Israelis started firing tear gas. The crowd by then, including many families, was getting too big. And the young men were getting too close to the border wire. On the other side, the Israelis say they're in the right.

Jonathan Conricus, IDF: We are not here looking to create casualties of Palestinians, that is not our aim. We are simply here to defend what is ours. We are defending our sovereignty, our civilians that live in close proximity, against an onslaught, led by a terrorist organisation that is using civilians in order to penetrate into Israel.

Much of Gaza's rage is born in places like Beach Camp, still a home for refugees 70 years after more than 700,000 Palestinians fled or were forced out of their homes by newly independent Israel. Palestinians call it "Nakba" - catastrophe. 70% of Palestinians in Gaza are refugees, stuck fast in history. At the Al-Farooq mosque, Yazan Tobasi's funeral was much quieter than his death - shot through the eye during the protests. His body was wrapped in the Hamas flag. He was 23 and his friends were there to bury him. There were tender moments. Israel says it told them to stay away from the border and Hamas is responsible for what happened. His friend Mohamed El Bahrawy said Yazan had worked at the hospital, without pay, because of Gaza's collapsing economy. Poverty and grief breed anger. And so do the deaths of children. A family gathered for another funeral. It was for Leyla Al-Ghandour, who was eight months old. She had a weak heart and when she inhaled tear gas, she died, her family said. Children make up half of Gaza's population. Six were killed on Monday, according to the Ministry of Health. Her mother Mariam was in a pit of grief. At Shifa, the main hospital, wounded men were being transferred to Egypt for surgery. Inside, they were still treating casualties from the protest. This boy is 16. All day, I've been asking Palestinians if Hamas forced them to risk their lives at the protests. No one said yes. "I did it because Jerusalem is Palestinian," said Qadir Arras, unemployed, 24-years-old. This is the busiest time at the hospital since the 2014 war.

Dr Ayman Sahbani, Director of Emergency Services, al-Shifa Hospital: As a human being, I speak, it is horrible to think about. If you saw it yesterday, that situation, it is horrible. Crying, bloody, pain, painful... What's happening?

After the protests, it seems that many people are hoping for some kind of turning point. But the fundamentals of this conflict don't change. Jeremy Bowen, BBC News, Gaza.
Newsreader: Jeremy was focusing there on the hostility between Israel and the Palestinians, which has long centred on the land and the borders created following that war that led the establishment of Israel back in 1948 . Our chief international correspondent, Lyse Doucet, takes a closer look now at the history of the continuing struggle. 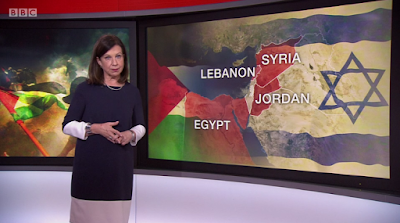 Lyse Doucet: A history of the people on the run time and again. 1948, the Arab-Israeli war and the creation of Israel. Tens of thousands of Palestinians fled to Gaza, many forced from their homes. A narrow sliver of land became known as the Gaza Strip. Its borders defined by the positions of Egyptian and Israeli forces, separate from the West Bank when the 1948 ceasefire was declared. And for the next 70 years, Gaza's future would be shaped by its neighbours - most of all, the State of Israel. In 1967, in the Six Day War, Israel occupied Gaza and the West Bank, started building Jewish settlements on the best land, including along the Mediterranean. And then, decades later, a promise of land for peace. The last settlers and soldiers would leave in 2005, proclaiming the end of Israeli occupation, but Israel kept control of all borders, land, air and sea. Gazans called it 'the world's biggest prison'. But Palestinian politics played its part, too. The next year elections brought the militant group Hamas to power, pushing out Fatah, the main Palestinian faction. It pushed Gaza towards a growing confrontation with Israel, and a tightening blockade which created a growing humanitarian crisis. In the last ten years, three wars, and in between, efforts to ease Gaza's blockade, But never enough. And never enough aid. At the UN Security Council today, this same calls for restraint, and the US stood by its ally:

Nikki Haley, US ambassador to the UN: I ask my colleagues here on the Security Council, who among us would accept this kind of activity on your border? No one would. No country in this chamber would act with more restraint than Israel has.

And the same calls to return to peace talks:

Karen Pierce, UK ambassador to the UN: We see negotiations towards the two state solution is the best way to end the occupation and to meet the national aspirations of the Jewish and Palestinian peoples.

Gaza's fate has been sealed, literary, by its borders. The only route to a better future, through negotiations. But that's now further away than ever. Lyse Doucet, BBC News.
Newsreader: Lyse Doucet, our chief international correspondent, on the continuing hostility between Israel and the Palestinians.
Posted by Craig at 20:40