A few days ago I watched Roger Waters on Al Jazeera to see whether I’m really willing to listen to the other side.

Roger Waters believes that if one supports Human Rights one should also be a passionate supporter of the Palestinian cause. Gesturing ‘zip-across-the mouth', he believes he isn’t “allowed to speak out” on the MSM’ He is adamant that he is not an antisemite.

Al Jazeera’s grinning hostess gently challenged him on the apparent disconnect between, eg, his silence on the Russian - Ukrainian situation and his all-consuming quest for “Justice” for the “Palestinian people”. Unable to offer a coherent explanation he faltered and ground to a halt.

Curious as to how he might define an antisemite since he obviously doesn’t want to be thought of as one, I assume that willingness to tolerate the Jews who disavow or denounce Israel is enough, in his eyes, to exonerate one from the disgrace of being deemed a racist.

The BBC hasn’t no-platformed him as far as I know. Granted they don’t give his pseudo-intellectual political ramblings much publicity, but they still venerate his former magnificence as one of the iconic 60s rock group Pink Floyd.

A few days ago I saw the clip of Piers Corbyn and David Icke sharing a platform  - well you know the rest. I didn’t blog it then, but I should have because several others spotted it too, but belatedly. I could have had a scoop.

Similarly, David Collier flagged up that weird Nimesh Thaker and his ‘Not That Bothered’ Twitter account. I had already seen it on another site but I let it go. Another nugget I might have scooped., but didn’t.

But I don’t care. The urgency is blunted. Everyone is aware that the BBC is biased. They might not be as interested in the anti-Israel angle as I am, but they’re on the case. I am glad this is happening, but the problem for me is that so many of the better-late-than-never pundits who have risen to a collective crescendo over BBC bias have gone for low hanging fruit. Mostly they cite examples that we’ve highlighted. Lewis Goodall and so on. The Proms. Not that we deserve the credit - it would be very wishful indeed to think that our decade-worth of blood sweat and tears had paid off.

Did anyone spot a gem of would-be satire in the Guardian a few days ago? Chatting to a high court judge about crime and criminals, (as you do) m’lud remarked that most criminals look like criminals. Look at mugshots and you’ll see that there’s more than a grain of truth in that. 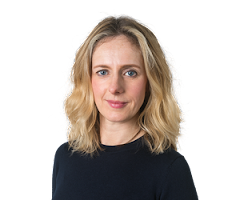 Marina Hyde, pictured with either a sneer or some kind of Bell’s Palsy (which I understand is a temporary condition) is a perfect example of 'show me the mugshot and I’ll show you the character'.

She fantasises about a biased-to-the-right-incarnation of the BBC. 'The Fox News Beeb'. Here we have an oh so witty description of a right-wing BBC from Hell and it’s so hilarious I can hardly type for the tears running down my legs; as the saying went.

Which extremists and fascists would feature in the Guardian’s right-wing TV from Hell?  What totalitarian creatures would star in an imaginary Foxy BBC Reichstag? Well, Marina Hyde names the bad guys thus:

The concept of a parody of a ghastly right-wing BBC must amuse her and her Guardian-worshipping followers because un-self-aware amusing parodies are the genre - nay,  the life-blood - of Marina Hyde and, say, John Crace. But ha! The joke’s on her! She forgot Melanie Phillips!

Sadly, the alternative non-hilarious schedule of the BBC from Hell isn’t a fantasy. We have Lewis Goodall, Emily Maitlis, Kirsty Wank (Oh my aching sides) Owen Jones, Victoria Derbyshire, Jeremy Bowen, Ed Stourton, Mishal Husain, The Labour Party, the entire staff of the Guardian and the independent and representatives of Novara Media and The Canary.

That’s your alternative version of the media from Hell and I’m not even joking.