XR and the BBC, cancellations and platforms 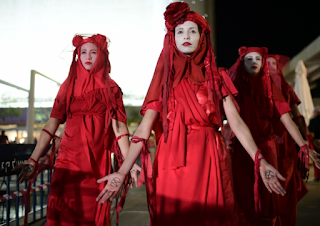 An online conversation this morning...

Julie Hartley-Brewer: I don't want to live in a country where extremists like Extinction Rebellion are allowed to prevent newspapers being distributed simply because they don't agree with their views. That is NOT what democracy or free speech look like. It must NEVER be allowed to happen again.

Priti Patel: This morning people across the country will be prevented from reading their newspaper because of the actions of Extinction Rebellion. This attack on our free press, society and democracy is completely unacceptable.

Julie Hartley-Brewer: Yes. But where were the police? Why didn't they prevent this from happening? Peaceful protest, yes. But XR shouldn't be allowed to blockade printing plants. This can NEVER happen again Priti Patel.

Dan Hodges: Why are people acting with shock at Extinction Rebellion’s tactics. They’ve been been feted by the liberal establishment, told their cause legitimises breaking the law, and been bolstered in the view anyone opposing backs global Armageddon. Of course they going to do this stuff.

Dan Hodges: The problem is Extinction Rebellion  aren’t an outlier. We saw this with the Co-Op and the Spectator yesterday. There is an increasingly mainstream view amongst the progressive Left that silencing of dissenting views is a legitimate campaign tactic. The ends justify the means.

David Aaronovitch: It’s not just the Left; it’s a problem on both sides of the culture war.

David Moore: Cancel culture is predominantly a problem of the progressive left.

David Aaronovitch: I think you need to tell that to all the ‘defund the BBC’ers. The mentality is pretty much the same.

Julia Hartley-Brewer: I don't agree with the DefundTheBBCers but they are calling for an end to taxpayers funding just ONE viewpoint from the BBC, not for that viewpoint to be silenced or punished. They just don't want to be forced to pay for it. That's not the same thing at all.

David Aaronovitch: Their arguments, like those of cancellers, are dishonest. They hear things they don’t like and they want to shut them down but they will always couch it in terms of offence, or taxpayers money or other rationalisation.

Julia Hartley-Brewer: No, that's not their argument. We should all expect to hear things we don't like. The BBC has given up all impartiality in news reporting or comment. It now reflects a Guardian world view only. People are happy to hear that view but not ONLY that view & being forced to pay for it