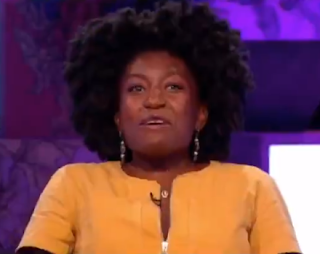 As Charlie noted on the open thread, this was the BBC's official response to criticism of the '(we do) want to Kill Whitey' "joke" on Frankie Boyle's New World Order:

Frankie Boyle's New World Order was shown after 10pm and its content is within audience expectations for a post-watershed, topical, satirical programme from a comedian whose style and tone are well-established.

As Cue Bono added,  "Yeah, as we all know a white comedian talking about killing black people would also be perfectly acceptable after 10pm".

Meanwhile, here's a short conversation on the matter (via Twitter).

If you recall, I quoted comedian Konstantin Kisin the other day saying, "I am a huge fan of the BBC (or at least what it could be) and I will never criticise a comedian for trying an edgy joke but how is anyone supposed to defend the producer who thought this should go out? Insane."

This is what happened next:

Daliso Chaponda: Who is this who has taken over Konstantin Kisin's account? Didn't the real Konstantin do a half hour interview about how freedom of speech is a fundamental principle under threat?  Wasn't he on Good Morning Britain saying people shouldn't take jokes literally.

Konstantin Kisin: Hi Daliso, not sure how my tweet can be read as anything other "she has every right to make the joke, I don't think the BBC should have put it out". This was the conclusion that most sensible people came to with Jo Brand, who I defended if you remember.