I’m very sorry but I hardly watch the BBC these days. It’s not really a question of aligning with the ‘defund’ or ‘defend’ side of the argument or whether I think the BBC should be ‘reformed’ or ‘removed’. It’s partly because of the increasingly desperate pandering to a demographic….

…..that has moved on and doesn’t watch TV! And now, neither do I. (Well, I do, but rarely the BBC) The bias looks more and more entrenched. Who is in charge of this ‘unconscious bias’ training they’re talking about? 17 minutes to 9 (2:44) If the bias is unconscious, then how can the trainers know whether they too are suffering from it? It’s those wretched unknown unknowns again.

This @Guardian article is based on a @BBCArabic hatchet job. The program fails to note that the neighborhood only became 'Palestinian' after Jewish residents were driven out in the 1930s, or that the Sumarin family was evicted because it stopped paying rent.#InconvenientDetails pic.twitter.com/dCpBHlHcFE

I didn’t want to watch Panorama last night - I haven’t watched it for years, the exception being the controversial John Ware episode that shed light on the Labour Party’s malevolent racism. However, the programme was on when I walked into the room just in time to see Richard Bilton cycling, W1A style, through deserted city streets. (why?) 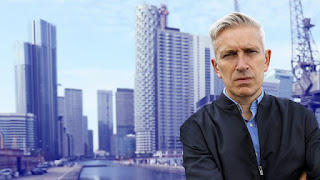 Well, it seems that he had unearthed some dirty dealing, which could be summed up as:

BREAKING NEWS: A man living in Israel donates large amount of money to an Israeli organisation based in the capital of Israel.

Surely worth a Pulitzer no? https://t.co/NHZg4lDNhI

And the reason I’m even bothering to mention this is simply to point out that Bilton’s emotionally loaded language epitomises bias, be it conscious or unconscious, but not only the conscious/unconscious/subliminal repetitious utterance of trigger words like ‘settlers’ and the BBC/ Guardian’s casual scattering of “illegal under international law” and “Palestinian land” etc etc, this emotive background nagging demonstrates how effortlessly ‘unconscious’ or bog-standard ‘conscious bias’ is slipped in, enabling Richard Bilton and his unconscious mates to virtue-signal rather than apply the rigour of genuine curiosity and self-examination to his research.  (Research? What research?)