When Tony Met James and Katty 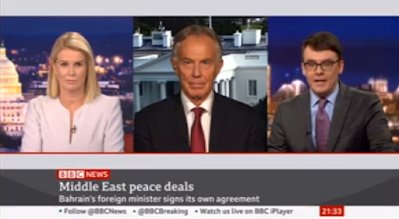 I was just going to post the questions here, but why not post the whole interview? (I can guess an answer to that, it's Tony Blair!)

The questions are very BBC.

There's James Reynolds going straight for the negative and suggesting that Israel's agreements with Arab nations might be putting the region "on the road to open conflict", then pursuing the "sidelining" of the Palestinians angle, and then interrupting to point out that "many" more than just the Palestinians don't want peace with Israel yet.

And there's Katty Kay (naturally) going for the Trumps - as she did even more emphatically in her follow-up question about Trump and climate change.

James Reynolds: Let's look at the reasons for this alliance coming about. The Iraq War, which you co-led, got rid of Saddam Hussein but it also gave much freer rein to Iran to expand as a regional power. In order to counter that Israel and some of the Gulf States are getting together potentially putting the region on the road to open conflict. How is the Middle East a safer place after this deal?

Tony Blair: James, I think you can tell the history a little bit differently. The fact is, this is now just about security and about Iran. It's about the belief in the Middle East that if you want to establish a peaceful Middle East, then you have got to establish relationships between the State of Israel and the Arab nations. That is entirely sensible, not just for reasons of security, Yes, it's true, Israel and the Arab nations are very worried about what Iran does to destabilise the region, but they're also worried about the various extreme groups on the Sunni side who also want to destabilise the region. And what these agreements symbolise are people coming together in pursuit of a different Middle East, one that is based on religiously tolerant societies and modern economies. And that's what is really behind this. And I think what you will find with the agreement signed today is that this is not going to be a cold peace, and it's not going to be about security. It will be about a warm peace and it will be about actual engagement in the economy, in culture and, of course, in  the resolution of the Palestinian issue.

James Reynolds: When you visited Israel and also the Palestinians as prime minister after 9/11...I remember those visits. I was a Jerusalem correspondent at the time...here was a common belief that you couldn't solve any of the problems until you had tackled and solved the Israeli-Palestinian conflict. But doesn't this 2020 agreement show something completely different, that you can solve parts of the Israeli-Arab conflict by sidelining the Palestinians instead of resolving their fate?

Tony Blair: You're not sidelining the Palestinians. Look, you're not going to get a...I've studied this now for the best part of 20 years, I was heavily involved as Prime Minister. I was involved afterwards as the quartet envoy, I've spent the last five or six  years working on the Arab-Israeli relationship. You're not going to solve it unless two things happen. You've got to get a Palestinian politics that is unified and in favour of peace, and you've got to bring the Arab nations alongside the Palestinians in that peace effort. And so, when people say - and there are, of course, people on the Palestinian side who say - no, you should have nothing to do with Israel....

James Reynolds: (interupting) Many are saying that.

Tony Blair: ...until the Palestinian issue has been resolved. They do say that. but the strategy they've had up to now has not worked, and it won't work in the future. The right strategy is to encourage the relationship between Israel and the Arab nations and then say to the Arab nations. 'We need your support. A unified Palestinian politics in favour of peace needs your support. That is a strategy that can succeed. If we carry on doing what we have been doing for the last half-century, we'll carry on with the same result'.

Tony Blair: Katty, the White House, to be fair, have been reaching out the entire time. It's the Palestinians that won't engage with the Americans at the moment. Now, I understand all the reasons for that, moving the embassy to Jerusalem and so on. But the fact of the matter is, the intervention of the UAE was what prevented the annexation plans going ahead, and if the Jordan valley were to be annexed that would make a Palestinian state very difficult. So that intervention has actually preserved the possibility of a future Palestinian state. And, you know, the best thing for the Palestinians to do would be to engage with the Americans, engage with them by the way not saying that we agree with your plan, but saying let us sit down and discuss the detail of it. Because otherwise, and this is why...I understand completely why...people like me, when we encourage this relationship between the Israelis and the Arabs, they say. oh, you're an Israeli stooge, you don't care about the Palestinians. If the Palestinians don't get a different political strategy they will never get a state. What they've got at the moment is a strategy for sympathy. They need a strategy for statehood, and a strategy for statehood has to begin with making sure you engage with the Americans because they are powerful, making sure you bring the Arab nations on side because they can help, and making sure the Israelis feel secure with a Palestinian state because at the present time they don't. So if you want the strategy to succeed, that's how to do it.