One minute to midnight 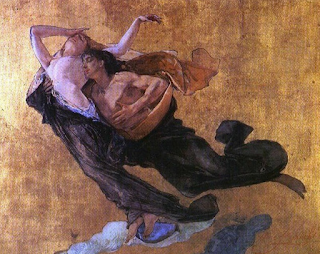 'Francesca' is a fine Italian name. Fans of Dante will recall poor Francesca da Rimini, blown about the first circle of Hell like a leaf in a never-ending whirlwind alongside her no less ill-fated lover Paolo.

Most readers over the centuries have felt nothing but sympathy for her.

Will they sympathise with Francesca della BBC though?

Here's her story. (Please try not to faint with pity.)

Fran Unsworth, the BBC's Director of News and Current Affairs, jetted off to Italy this week to speak at the Prix Italia conference - it's a hard life, but I suppose someone has to do it - and reading her speech makes it sound as if she feels she's in the first circle of Hell at the moment being blown about like a leaf in a never-ending wind too. She even begins by saying:

We live in stormy times and are all trying to navigate through them with intelligence and with good hearts and good intentions.

What's bothering her especially is the impact of the 'culture wars' on the BBC and the fact that "many actors wish to co-opt us into their side of the culture war". She strongly hints that some BBC staff have already been co-opted:

Online warriors...can encourage staff with a particular interest in an aspect of the news, for example from their lived experience, to seek to persuade editors that their view of the world needs to be reflected in our coverage. Or that we should adopt the particular vocabulary they endorse.

She says this is "increasingly hard this is to resist" (we've noticed, as per Extinction Rebellion and Black Lives Matter!), but says if the BBC don’t resist it they will "undermine their future as a universal public service media organisation, taking money from everyone".

What can be done? She says that newsrooms should

(1) "Decide on the right editorial way forward and the right language to deploy, in a clear, calm, considered fashion. And which when challenged can explain their decisions quickly and responsively to both the outside world and to our own staff".

(2) "Shrug off social media pressure and the cancel culture, and parry the unfair attacks on our honesty and intentions".

(3) "More than anything, we need newsroom leaders who are ready to reflect a broad range of thinking, who don’t always go down the same narrow, well-trodden path because it is the one they have always followed".

Shrugging off social media pressure and the cancel culture is a good idea, and of course the BBC should parry unfair attacks on their honesty intentions. And it's good that she acknowledges the narrowness of the range of thinking among BBC 'newsroom leaders'.

BBC groupthink rules, and it will take a lot of blood, sweat and tears to change - if her and Tim Davie seriously want to change it.

It is precisely because (3) isn't remotely in place that so many wrong editorial ways forward have been chosen in the past few years (and decades) - and it's getting worse. (Just look at Newsnight).

'A broader range of thinking' is surely the horse, 'deciding the right editorial way forward' the cart?

Anyhow, Miss Unsworth ended her speech with a rhetorical flourish:

If we don’t analyse the dangers these cultural issues pose to public service broadcasters and think them through, we may look up and see to our surprise that the hands of that clock we watch all day are pointing at one minute to midnight.

Many, of course, think it's past midnight already.