The BBC nags Naga. But what next? 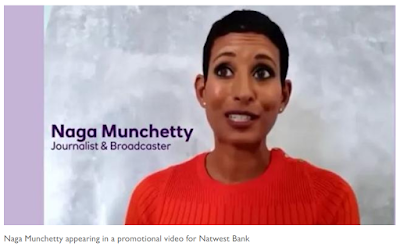 I see that Naga Munchetty has fallen foul of the BBC's own guidelines, yet again.
She's had a very busy year on that front. She's found herself pretty much up to the neck in mud most of the year.
She hit the headlines again only last month after the BBC publicly chastised her for moonlighting on behalf of Aston Martin. Her bosses were concerned about a possible conflict of interest.
And now she's hit the headlines once more for moonlighting on behalf of the NatWest bank.
The Daily Mail, reporting the story, adds that it's "come to light the star commands a £15,000 fee for speaking at engagements - on top of her £195,000-a-year salary".
When I first heard this story I failed to immediately pick up on the fact that the papers weren't just adding to the earlier story by piling up extra tales of previous indiscretions but were actually adding something fresh and far more damning: Naga Munchetty broke BBC guidelines over moonlighting again after her previous ticking-off.
That's surely the staggering thing.
The moonlighting element of BBC stars' behaviour in itself isn't one that particularly grips me - though that "£15,000 fee for speaking at engagements" is eye-rollingly ridiculous. I can see why the Corporation's guardians of impartiality would worry about possible conflicts of interest - though such COIs (new acronym?) seem rather theoretical to me in cases like this.
No, it's the fact that this high-profile publicly-funded BBC journalist very obviously took absolutely no notice whatsoever of her publicly-funded bosses' concerns and criticisms and just did continued doing what she pleased.
It suggests to me that she's seriously out-of-control.
This time the BBC has said:

On this occasion, as the event was public facing, we have advised Naga that this could be seen as a conflict of interest and this will be kept in mind for future editorial decisions.

Pretty much like last time then.
So it's déjà vu all over again.
(Quiz question: Who is the phrase 'It's déjà vu all over again' first attributed to? Update: The Wiganer gives the correct answer in the comments. No peaking!).
I doubt that will stop her. I suspect she thinks herself unsackable.
And she may very well be right.
Earlier this year Tony Hall rode to her rescue, overruling his own senior colleagues' well-founded criticism of her. Lord Hall's gone now, so the question is now in the lap of his impartially-focused successor.
Will Tim Davie continue to allow Naga to commit strike after strike after strike against the BBC's editorial guidelines (on several fronts) or will he dare to stand up and say that enough's enough, and that if she does it again she's OUT, no ifs, not buts?
Posted by Craig at 15:10