Our old blogging comrade-in-arms DB is asking an interesting question this afternoon:

Why does the BBC go out of its way to advertise the street addresses of Dover protesters but not Extinction Rebellion? Intimidation? Hopes of retribution? with this BBC report: 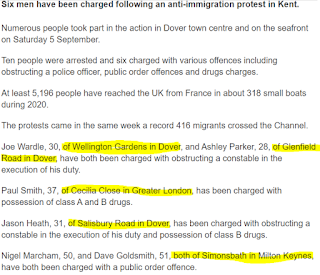 It's a striking contrast, isn't it? It certainly shows bias.

It also ties in with the way the BBC's specialist misinformation unit has gone in for heavy, highly focused, critical coverage of the protests against Covid-19 restrictions, with lots of debunking and labelling, but has pretty much let the dangerous misinformation pushed by the XR and BLM protestors go without challenge or criticism.

Another item for Tim Davie's in-tray?