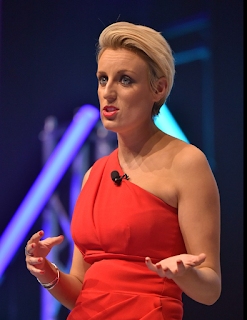 Andrew Neil is a big fish. The BBC is a big pond. Will he find GB News a small pond?

But sometimes people who are considered - and especially who consider themselves - 'BBC stars' have sunk rather than swum after leaving Auntie's protectively ample bosom.

Take the case of former 'BBC Breakfast star' Steph McGovern - the one who boasted to Boris Johnson about being in her job longer than he would be in his job.

This new 'star vehicle', the Daily Mirror reported this week, "failed to record a single viewer earlier this week":

That's one heck of an achievement. It doesn't even sound possible. I'm assuming the ratings went so low they couldn't be detected by BARB (the Broadcasters Audience Research Board).

Reading the Mirror piece it's hard not to feel sorry for her. She's up against ITV's Loose Women and appears to be receiving a cruel wake-up call.

Maybe, in a few months, she'll be asking Andrew Neil to "gizza job"?