"How could you disagree with that?"

Hugh Sykes: Lest We Forget. A memorial in Calais to five young members of the Resistance, "shot here at dawn on September 3rd 1944." Now, Germany and France are at peace with prosperity - and the UK, which helped to achieve both, is in danger of forgetting.... 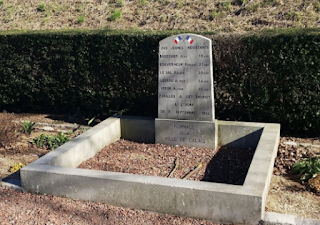 Jane Dunning: I've just finished They Fought Alone by Maurice Buckmaster (F Section SOE). Towards the end of the book, resisters head off to an encounter shouting 'Vive la France! Vive l'Angleterre!'. I felt sad reading this. We are making a huge mistake. 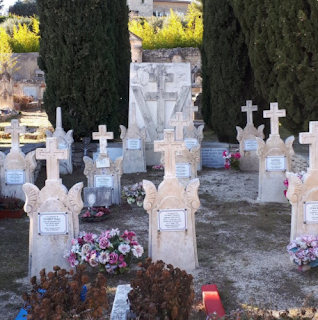 Graves of the Free French in Gordes, Luberon (fairly near Avignon). I'm planning a French Resistance element to Book 3 of my trilogy.
Hugh Sykes: A relative of my wife's was in the resistance in the Haut Morgon, and guided British gliders in at night with the headlights of his car.
Jane Dunning: It must've been terrifying.
Hugh Sykes: When he told me about it, he told me with pride and delight and with no hint of fear.
Jane Dunning: Good. It must've changed everyone so much. I wonder how everyone returned to normality after the conflict ended.
Hugh Sykes: I'm not sure they all did.
Douglas McWilliams: Don’t push it too far. Economic integration has in general reduced tensions, but the Euro has ramped them up. I suspect the lack of war is more because we all exhausted ourselves last time than because of any institutional arrangements.
Hugh Sykes: Enduring peace since 1945 between nations which fought each other with vicious destruction and startling loss of life in two wars in the last century has been an astonishing achievement which it is criminal to jeopardise. [Image: Cologne 1945] 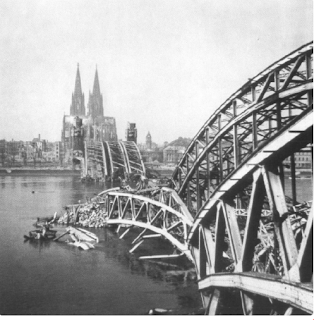 Douglas McWilliams: Thanks for the response. Obviously I disagree with you....but have a good weekend.
Hugh Sykes: How could you disagree with that? Peace is precious.
Douglas McWilliams: I don’t think Brexit places any risk to peace.
Hugh Sykes: The UK is part of a union of mutual trust & cooperation that has helped to anchor priceless peace in Europe for 75 years. There is an ignorant & dangerous undercurrent to Brexit - of xenophobia stoked by people too young (or unimaginative) to know what they are putting at risk.
Posted by Craig at 06:24