BBC Woman's Hour presenter Dame Jenni Murray - an impartial BBC feminist if ever there was one - has, for the past couple of years or so, been the target of furious (maybe testosterone-fuelled?) 'outrage' from transgender activists.

Their latest no-platforming campaign against the famed feminist BBC dame has been to try and stop her speaking at the Leeds Literature Festival, where she intended to promote her latest (impartial) feminist book.

The Leeds Literature Festival refused to ban her whilst being as grovelling as possible to the censorious trans activists as possible in their statement defending their decision. 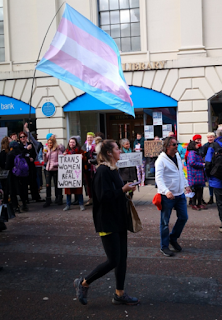