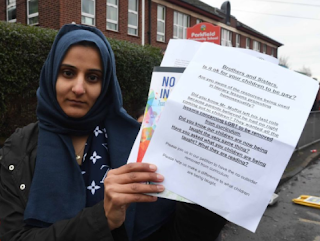 Here's an exchange from the latest Open Thread:

Monkey Brains4 March 2019 at 22:42
Guardian reporting that the school teaching LBGT equality has had to back down...

According to the Guardian: "On Friday about 600 Muslim children, aged between four and 11, were withdrawn from the school for the day, parents said."


And here are the full texts of the BBC and Guardian articles, followed by the report on the same story from the Times.

The BBC's "social cohesion above everything else" bias is pretty much proven here.

Note how long it takes for the BBC to mention the word "Muslim", and (as MB says) how coy they are about the numbers involved in the protest.

Also note how the word "threats" - featured in the Guardian and Times reports - doesn't make the BBC report.

There is clearly some very conscious editorial decision-making going on behind that BBC report - and it's a kind of BBC editorialising that we've highlighted many, many times before.

The idea that the BBC hasn't got an agenda and that it doesn't go out of its way to push it is, yet again, shown to be a false idea by this kind of comparative reporting:

Parkfield Community School LGBT protests: School denies 'U-turn'
A school which has suspended lessons about LGBT rights and homophobia following protests from parents has denied the move is a U-turn.
Parkfield Community School in Alum Rock, Birmingham, has seen protests over its No Outsiders project.
It said it was always the plan for the classes to stop at half-term.
But, it added, there is a need for discussions between teachers and parents about the curriculum and how it should be delivered in the future.
A spokesperson for the school - which has about 740 pupils aged three to 11 - told the BBC the No Outsiders programme is still an integral part of its ethos.
They said it was always in the curriculum plan to use the remainder of the term for religious education.
The project was developed by assistant head Andrew Moffat in 2014, with the aim to educate children to accept differences in society.
As well as LGBT issues, it teaches about race, religion, gender identity, age and disabilities.
But it has faced criticism from some Muslim parents for teaching children about same-sex couples.
Parents said the classes are not appropriate for young children and have staged protests claiming hundreds of pupils were kept home from lessons on Friday.
Liam Byrne, MP for Hodge Hill, who was present at a recent meeting between the school and parents, said he has asked the Secretary of State to meet with families.
The school said it will hold talks with concerned parents over the remainder of the school term about the teaching of The Equality Act 2010.
In a letter detailing plans, it encouraged parents to ask their children what No Outsiders is about, saying "the children are very clear there is no focus on one aspect of equality, rather No Outsiders teaches that everyone is welcome".
It also said, in light of new government legislation to make relationships education compulsory in primary schools from September 2020, it will be consulting with parents to develop its policy and curriculum on the subject.

A primary school that taught pupils about homosexuality as part of a programme to challenge homophobia has stopped the lessons after hundreds of children were withdrawn by parents in protest.
Parkfield community school in Saltley, Birmingham, has been the scene of weekly protests over the lessons, which parents claim are promoting gay and transgender lifestyles.
In a letter to parents, the school said: “Up to the end of this term, we will not be delivering any No Outsiders lessons in our long-term year curriculum plan, as this half term has already been blocked for religious education (RE). Equality assemblies will continue as normal and our welcoming No Outsiders ethos will be there for all.”
On Friday about 600 Muslim children, aged between four and 11, were withdrawn from the school for the day, parents said. The school would not confirm the number.
The school made clear that it had never intended to continue the No Outsiders lessons this half term and confirmed that the lessons would resume only after a full consultation with every parent.
Last month, the Guardian reported that the assistant headteacher of the school was forced to defend the lessons after 400 predominantly Muslim parents signed a petition calling for them to be dropped from the curriculum.
Andrew Moffat, who was awarded an MBE for his work in equality education, said he was threatened and targeted via a leaflet campaign after the school piloted the No Outsiders programme. Its ethos is to promote LGBT equality and challenge homophobia in primary schools.
Moffat, the author of Challenging Homophobia in Primary Schools who is currently shortlisted for a world’s best teacher award, resigned from another primary school – Chilwell Croft academy, also in Birmingham – after a similar dispute with Muslim and Christian parents.
Parents have been protesting outside the Saltley school, which is rated as outstanding by Ofsted. At one protest they held signs that read “say no to promoting of homosexuality and LGBT ways of life to our children”, “stop exploiting children’s innocence”, and “education not indoctrination”.
Children from reception age through to year six were being taught five No Outsiders lessons a year, each one covering topics to meet requirements in the Equality Act. Books being read by the pupils include Mommy, Mama and Me, and King & King – stories about same-sex relationships and marriages.
However, after the inclusion of the programme in the curriculum, Moffat, who is in a civil partnership, faced protests and the removal of children from the school.
The school appealed to parents to stop the protests, saying they were “upsetting and disruptive” for the children.
In a letter to the parents, the trustee board of Excelsior Multi Academy Trust, which runs the school, confirmed that after a meeting between Andrew Warren, the regional schools commissioner for the West Midlands, parents, the trust, and Liam Byrne MP, it was decided that a full consultation would take place with parents.
The letter said: “The discussions were a helpful first step and identified the key issues that are concerning parents, including the ethos, the books, the age appropriateness, the lessons and the assemblies. The agreed outcome of the meeting was the need to have a discussion with the school community about the No Outsiders curriculum and how it should be delivered.”
The issue was first raised by Fatima Shah, who pulled her 10-year-old daughter out of the school, saying children were too young to be learning about same-sex marriages and LGBT rights in the classroom.
“We are not a bunch of homophobic mothers,” she said. “We just feel that some of these lessons are inappropriate. Some of the themes being discussed are very adult and complex and the children are getting confused.
“They need to be allowed to be children rather than having to constantly think about equalities and rights.”
Shabana Mahmood, the MP for Birmingham Ladywood, spoke out after parents in her constituency complained that primary schools were teaching their children about same-sex relationships.
She said parents did not oppose sex and relationship education, but felt their children were too young for some of the things being taught.
Speaking in a Commons debate, Mahmood said: “None of my constituents is seeking particular or differential opt-outs at secondary school level. It is all about the age appropriateness of conversations with young children in the context of religious backgrounds.”
Mahmood, who has backed gay rights legislation in the Commons including voting for same-sex marriage, said the government should ensure the rights of minorities were protected, but that included the rights of people with orthodox religious views, including some Jews and Christians as well as some Muslims.
However, the chief inspector of Ofsted, Amanda Spielman, supported the school, saying it was vital children knew about “families that have two mummies or two daddies”.
Byrne, whose constituency includes the school, has suggested parents, faith leaders in the Muslim community and the LGBT rights group Stonewall could work together on a curriculum.
The schools minister Nick Gibb said it was important for schools to take the religious beliefs of their pupils into account when they decide to deliver certain content to ensure topics were handled appropriately.


Primary school drops trans rights classes after boycott
A primary school that taught pupils about gay and transgender rights to challenge prejudice has stopped the lessons after hundreds of Muslim parents withdrew their children in protest.
Andrew Moffat, assistant head of Parkfield school in Birmingham, was appointed MBE for his work teaching children about equality. He devised the No Outsiders programme to teach pupils about same-sex couples and combat homophobia and transphobia. It comprised five lessons a year as part of sex and relationship education.
The community school, rated “outstanding” by Ofsted in 2016, was the subject of weekly protests from parents, who said that the lessons were “aggressively promoting homosexuality”.
Fatima Shah told the BBC that the protesters were “not a bunch of homophobic mothers” and that the classes were “not age-appropriate” and “not what we send children to school for”.
Last Friday a group of parents said that 600 Muslim children — about 80 per cent of the school’s pupils — had been kept away. The school would not confirm the number.
Mr Moffat said last month that he had received threats from some parents, including “nasty emails” and a message warning that he “wouldn’t last long”.
The school has now given in to the protesters and will not teach any more No Outsiders lessons this term after a meeting between the regional schools commissioner; parents; Liam Byrne, the local MP; and the trust that runs the school.
The school said in a letter to parents: “Up to the end of this term, we will not be delivering any No Outsiders lessons in our long-term year curriculum plan, as this half term has already been blocked for religious education. Equality assemblies will continue as normal and our welcoming No Outsiders ethos will be there for all.”
The Excelsior Multi Academy Trust said that it would have “a discussion with the school community about the No Outsiders curriculum and how it should be delivered”.


Imagine a white populist right-wing community doing this, and then understand why I talk about the Bigotry Of Low Expectations among the Regressive Left.