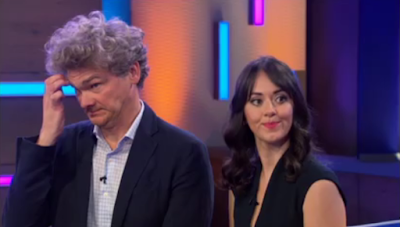 Alan's second appearance guest-hosting This Time on BBC One made be laugh more than the first episode.

And fancy BBC One making comedy out of the BBC's discomfort with its long complicity with Jimmy Savile-like pervert presenters!

...if only the script was as sharp as the acting.

It's not terrible, but it's still far from I'm Alan Partridge quality alas.

This post's title (a quote from the script) is one example of that, and here's another....

This is Alan's "tribute" to John Baskell, the big-boned, mainstay presenter of This Time, for whom Alan's been sitting-in (and desparate to replace) and whose death was announced before the programme went out.

Yes, it made me laugh, but it's certainly much more 'comedy silver' than the 'comedy gold' we Partridge twitchers truly crave:

"It seemed to me, you lived your life like a candle in the wind".

So said Elton John about Marilyn Monroe, Princess Diana... The list goes on.

But John was bigger than a mere candle. It seemed to me, he lived his life like an oil rig flare stack in a North Sea gale. Like an oil rig, he drew on huge reserves on energy, was physically quite squat, and, thanks to his prodigious whisky intake, helped prop up the economy of Scotland.

"Your candle burned out long before your legend ever did," continued Elton. And it's no exaggeration to say that Scotland's vast reserves of oil and gas would burn out long before John's legend is ever forgotten.

Exaggeration? Possibly. Sentimental nonsense? Again, unwise to rule it out. But there is broad agreement that John was good.

The former BBC Television Centre. John had a real appetite for this doughnut-shaped building and snaffled his way along the corridors, gorging on the opportunity, as he chomped his way to the top.

His big break, or mouthful, coming in 1985 with the BBC's Get Away. And it needn't cost you a king's ransom. Consisting largely of John in teeming holiday resorts, sampling cooked breakfasts in blazing sunshine, the show was, like the man himself, cheap and cheerful.

A great show! Terrible reviews!...saw it cancelled before the end of its run.

But it alerted the BBC's early warning system to John's talent, and he was now a big fat blip on their radar. This led to what John called his golden period - a veritable roll call of Britain's best-loved telly. Which is why, in 2012, he was named host of new magazine show This Time, delighting us all with puns about hedgehogs being prickly. They can be prickly customers.

John Baskell, what was he like?! Oh, what are you like?! THEATRICALLY: _ Yes, it seemed to me _ You lived your life like a candle in the wind... _ The life of John Baskell, by Alan Partridge.

That said, I think I'm feeling warmer towards the programme than our Rob: