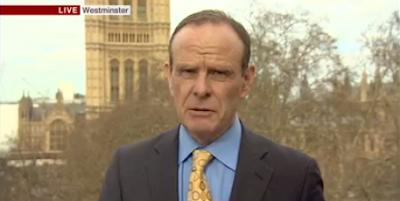 "Well, have a sort of almost parallel controversy in the Tory Party as we do in the Labour Party".

"Fascinating to look at the parallels, but clearly, both parties now facing very, very  significant difficulties and criticism, Labour obviously over antisemitism, but it would now appear an emerging controversy and problem for the Conservative Party too over Islamophobia".

So said the BBC's deputy political editor Norman Smith on the BBC News Channel this lunchtime.

Here's a comment at 'the other place' about the very same BBC moment. I think it sums it up very, very well:


AsISeeIt
March 5, 2019 at 12:54 pm
“A peculiar kind of parallel”
So says BBC man Norman Smith of the current problems Labour have with Anti-Jewish sentiment among its members and Baroness Warsi’s claims of institutional Islamophobia in the Tory Party.
Of course such apparent mirror images are absolute grist to the mill of supposed balance in BBC reporting. They are therefore quickly and unthinkingly made by the chap passed over by Ms Kuenssberg for the top Corporation political journo job.
Smith, who makes a name for himself popping up outside Westminster with pink ties, extravagant cartoonish reporting and his catchphrase “..but Labour say…”, is delighted to dish it out to the Tories and cover his own rear end from the Lefty Twitter mob who idealise Corbyn and will hear nothing against the Dear Leader.
Despite the BBC’s delighted newfound equivalence the two notions of actual Anti-Semitism and supposed Islamophobia are very very different beasts.
Posted by Craig at 18:38