Now, who to believe?

The Tories also took umbrage at this Newsnight-inspired item: 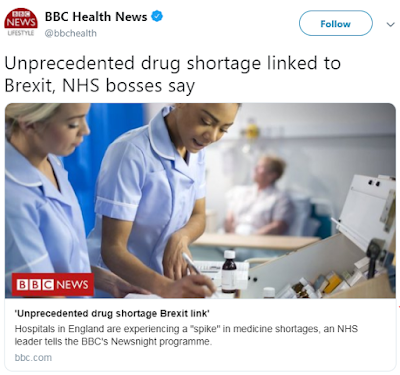 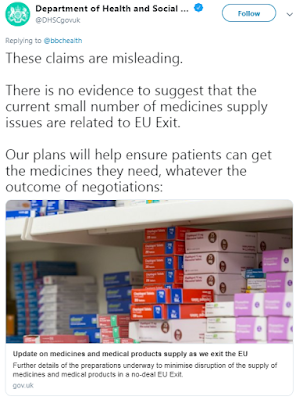 Yet again our healthcare authorities have to correct really irresponsible scaremongering over Brexit. Last one I saw was Gary Lineker. This time it’s... the BBC.

(though as someone replied, "If Leo Varadkar IS the EU then Gary Lineker IS the BBC").


So who's right - Newsnight or the DHSC? Well, I'm quite unable to say (not being an expert on such matters), but I can say that it's not unusual (as we know) for the BBC, including Newsnight, to go with alarming/alarmist warnings about Brexit as main stories.

In passing, however, Newsniffer shows that it took the Newsnight reporters in question - Ben Chu & Marianna Spring - nearly 24 hours to get their main talking head's job description right. For the first 21 hours of their BBC News website report she was identified as "Saffron Cordery, the chief executive of NHS Providers" until they edited the piece and she became "Saffron Cordery, deputy chief executive of NHS Providers". That's a long time to correct something as simple as that.

Another curious Newsnight fact here (just as an aside, and while I'm on) is that both reporters - Ben and Marianna - came to the BBC via left-leaning papers, namely The Independent and The Guardian respectively.  (Someone with a name like 'Marianna Spring' just had to have worked at The Guardian!}. Will that manifest itself in their reporting?
Posted by Craig at 15:19