How in any way is that acceptable? 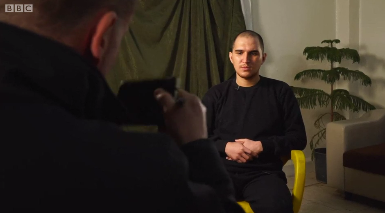 It was BBC man-of-the-moment Quentin Sommerville who got the 'scoop' today, interviewing Dutch paedophile Yago Riedijk.

(Quentin merely described him  as a "Dutch extremist").

Mr. Riedijk turned Muslim some time back and went off to fight for the genocidal Islamic death cult known as IS, and is best known as the ISIS groom who married comfortable-with-seeing-lots-of-heads-in-baskets jihadette Shemima Begum.

Some, on Twitter, are pleading with Quentin and the BBC to stop giving such people the oxygen of publicity, but a scoop's a scoop.

And Quentin did ask him about how he could justifying marrying a 15-year-old girl while he was aged 23. To be honest, I wasn't really interested, but she was, and she chose to marry and then I chose to marry her, he said.

And then he had three children with her.

And this paedophile's plea is STILL leading the BBC News website: