You Can't Always Get What You Want 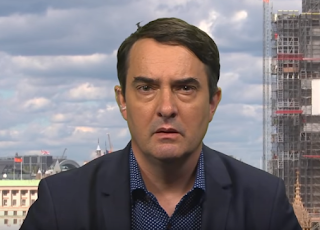 First Witch: When shall we three meet again?
In thunder, lightning, or in rain?
Second Witch:  When the hurlyburly's done,
When the battle's lost and won.

Rob Burley, the BBC's head of live political programmes, has been engaged in intense hand-to-hand combat again this morning. Here he is taking on screenwriter and director Paul Dornan.

(I think it's safe to say that no one has persuaded Paul to change his mind here):

Rob Burley: How come the Marr paper review is covering the march yesterday? I thought we were trying to suppress it!!
Paul Dornan: For about 20 secs. Constantly trivialised to be a chat about ironic placards. No conversation about the substance of why 1 million people were asking for on the streets. Nothing at all to boast about Rob. Followed by another 10 mins of Ian Duncan Smith talking unicorns again. For the 1000th time. While the People Vote position got no one. On the day after an earthquake march. Are you proud of the work you do Rob? You shouldn’t be. It’s utter rubbish.
Louise Bayne: But why isn't it in the news? You cannot defend BBC news choice to focus elsewhere. Where are the aerìal screenshots? Where are speeches?
Rob Burley (to Louise): They were on yesterday. When it happened. How long should we run it in the news? Two days? A week? A month?
Rob Burley (to Paul): “While the People’s Vote get no one”. Apart from Nicola Sturgeon who is on the telly now.
Paul Dornan: Are you saying she’s a representative of the People’s Vote campaign? She’s not. She’s on talking about Scotland. Quite rightly.
Rob Burley: She was one of the main speakers at the People’s Vote march yesterday. And she’s talking about it in this interview. But clearly as you are so invested in your position the truth is not the point here.
Paul Dornan: Yes. She spoke. But she’s not a representative of that campaign. You’re so invested in giving an open platform to Brexiteers you utterly fail in your duty to hear from one of the leaders of the biggest national protest in history. That’s dismal journalism by any standards.
Rob Burley: This is one of the more ridiculous tweets I have ever seen. Apparently Nicola Sturgeon - as featured at the People’s Vote rally - is not sufficiently Remain for Paul so therefore the BBC is biased.
Paul Dornan: Rob, are you saying that she - in an interview rightly focused on Scotland- somehow encapsulates the whole people’s Vote position and spoke in total for an event she didn’t organise? Is that your editorial logic? Because that is truly ridiculous.
William Kedjanyi (to Paul): No, but as a supporter of Remaining and a key speaker, she surely acts as a representative does she not?
Paul Dornan (to William): Not if the majority of the interview-which occurred before the march- quickly moves onto other matters, no.
Shaun (to Paul): Paul, who would be acceptable to you as one of the the leaders?
Paul Dornan (to Shaun): Someone from that campaign. Or Andrew Adonis. Or Femi Oluwole. Or Mike Galsworthy. I don’t know these people BTW. Just want a passionate and articulate advocate interested In discussing the issue a million people marched on.
Shaun (to Paul): Lord Adonis, Femi and Mike would all, I'm sure, happily do it but I'm also sure they'd acknowledge the superiority of the elected first minister of a country and leader of a party who clearly back the PV solution. The only person with similar credentials is Caroline Lucas.
Paul Dornan (to Shaun): Absolutely. Except in that actual interview the people’s vote barely got one question. Instead Marr asked about revocation. Brexit in Scotland. No Deal Funding. And a second Scottish independence referendum. In no way was that an interview about the PV. It just wasn’t.
Shaun (to Paul): It was much more important and effective that rather than the friendly puff piece with a sympathetic voice you seem to want they put it to the Brexit Sec and followed up with more questions to force it against its detractors, which they absolutely did.
Paul Dornan (to Shaun): I didn’t ask for a puff piece. Just a true advocate being given proper time to make a clear, well informed case on this issue. Which can then be questioned and interrogated. All we got was something v different. Ah well. Sadly not surprised.

Interestingly, despite what Paul says, the 'People's Vote' was discussed for more than 20 secs during the Andrew Marr paper review. It was closer to one-and-a-half minutes. Plus the Nicola Sturgeon interview began with her talking about the 'PV', the Keir Starmer interview devoted its first four minutes to Labour's position on the 'PV' and the issue was even raised with Stephen Barclay. But, yes, there was no Lord Adonis or Femi or Mike Goldsworthy, so Paul remains dissatisfied. Cue Mick Jagger & Co: