Meanwhile, who's fallen foul of the BBC's far-left critics this week? Well, it's their old target Laura Kuenssberg. She sent out this tweet yesterday: 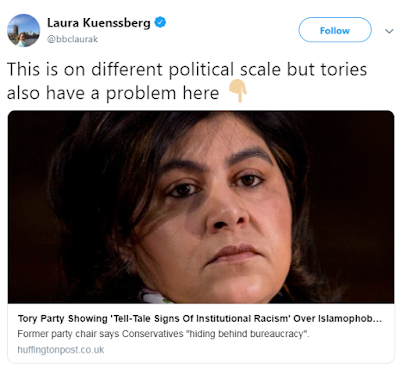 Now, you might think that saying that the Tories "also have a problem" here is exactly what Corbynistas would hope for from the BBC's political editor, especially as it would shift the focus away from Labour's antisemitism problem. But, no. They have instead seized on the phrase "This is on a different political scale" as evidence of biased (pro-Tory, anti-Labour) reporting on Laura's part.

Everyone from Owen Jones to Ash Sarkar is piling in against her and the BBC.

Again. You are SUPPOSED to be an IMPARTIAL BBC REPORTER. 'Here's some Tory racism, it's not as bad as Labour problems' is NOT impartial.

Oh dear. Well, Laura's right, of course, about the difference in scale, but should she be saying it?
Posted by Craig at 10:38