Any Questions. The one about Islamophobia

This is pretty much the same topic as the previous one, but I might as well create a separate post for the edition of Any Questions already noted below the line, in which Iain Dale disgraced himself with some unadulterated gobbledegook about Islamophobia:

“Everybody knows what it means, and just because someone has a different coloured skin and prays to a different God it doesn’t make them your enemy”

But what if they are pale-skinned, and their God has stated unequivocally that they are your enemy and they should hate you?   And what about Andy McDonald MP, who expressed exactly the view I mentioned in my previous post, namely that all written or spoken criticism of Islam automatically implies the author's approval of murder.

“look at some of the writings that take place. it’s not just on social media. It’s on our Main Stream Media! Where people are writing with bile directed at people of the Islamic faith… […] but it seems to have got into the box of “It’s ok to say this”. We have got to eradicate (the rhetoric) from our national and international life otherwise these things will happen again.

Even Jonathan Dimbles noticed what he did there.

“Andy McDonald, those individuals whom you describe who write in a very ugly and prejudicial way, clearly are not the individuals who would commit the kind of atrocities that occurred in Christchurch. Are you saying that you think there is some kind of linkage between their writings and the uh uh um disordered, demented behaviour of the people like this person who is going to be charged very probably with this crime?

“I think undoubtedly so, if people who are writing for what are otherwise respected publications and which have wide circulation, and there are many people who have been on panels such as these, who’ve had those views and have written articles in those terms, I think they’ve got to look at themselves in the mirror today and say what contribution does that make in fomenting that level of antagonism and prejudice and discrimination against people, and they are playing a very very active role in that and I think they’ve got to question how they behave and the sorts of languages (sic) that they indulge in and I really do urge them to think very carefully about this because they are part of the issue.

Perhaps realising the serious implications of what he just said, he appeared to row back:

“I’m not saying for one minute that they would sanction or approve such horrific events, but it’s the sort of environment that they establish, of acceptable discrimination or denial of the problem of Islamophobia, and those are the sort of things that have got to be addressed.

On antisemitism, it’s quite a different story.

“While the incidences of antisemitism are restricted to what is thankfully a very tiny proportion of what is a huge membership of over half a million, when accepted for what it is, we’re not in denial about it, and we will deal with it and we’re doing everything in our power to eradicate from our movement we have an absolute zero tolerance, what I would - I think that’s how we should approach it but I would - in terms of Islamophobia there’s a different attitude to it - it’s almost ‘casualised’, as if it’s acceptable, and Baroness Warsi has spoken out very loudly and long about that being rife in the Conservative Party and I just would urge colleagues across the house to take that seriously and root it out because at the moment, not enough is being done.

Andy McDonald has some gall. As if antisemitism hasn’t been rife in the left for years.  As if it's restricted to a very small proportion of the party. As if the Labour Party hasn’t been in the business of ‘othering’ Jews for years. As if the Guardian hasn’t been spouting antisemitic bile for years. As if Seamus Milne isn’t a rabid Jew-hating anti-Zionist fanatic. As if antisemitism hasn’t been "casualised" as if it’s acceptable. As if the Corbyn’s Labour Party hasn’t  got to look at themselves in the mirror today and say what contribution does that make in fomenting that level of antagonism and prejudice and discrimination against Jews and Israel, and playing a very very active role in that.” As if Baroness Warsi expressed herself in appropriate terms.


Above and below: examples of people slamming each other.

As for double standards on 'terrorism', well, 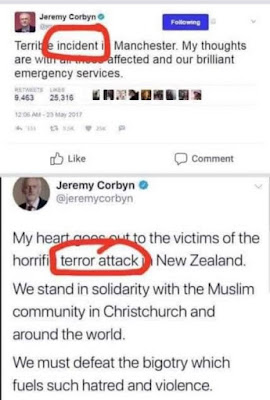 I couldn't listen to Any Answers all the way through - but as far as I could tell, they skipped this topic altogether and leapt straight to Brexit. Correct me if I'm wrong, please do. If not, I can hardly believe that no-one at all had anything to say about the tenor of this discussion. Even the M.P. who is always identified as "of Palestinian origins" (impeccably sacred credentials there) avoided answering the question in a similarly Islamophillic fashion. She deviated, almost immediately, onto a mini-diatribe about poverty and deprivation.
Posted by sue at 20:10