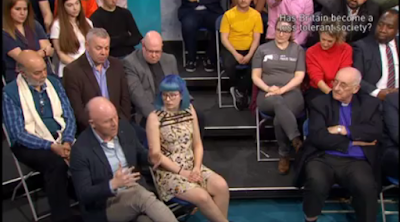 Just a follow-up to an earlier post (which you may have to quickly skim to catch-up on first!)...

Sonia Poulton went on to react to the BBC's statements about her 'bumping' from today's The Big Questions. She clearly believes that the BBC isn't being honest here:
Here's a list of the named contributors to today's programme:

Were any of these people the ones who allegedly refused to participate if Ms Poulton or right-wing Australian Helen Dale were on?

(P.S. I grinned that those old Sunday morning BBC One discussion programme staples Bishop Stephen Lowe and Angela Epstein were both on. Clearly no one's successfully no-platformed them yet on the BBC!)

(P.P.S. It was a bit odd that the first Big Question, "Do faiths need to adapt to survive?", featured Jews, Christians and Hindus but no Muslims. Islam didn't get a mention).
Posted by Craig at 13:34