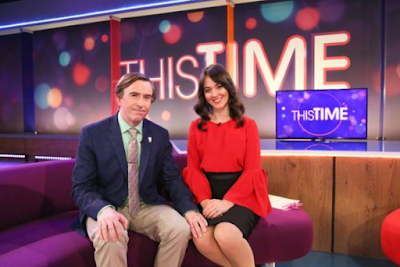 First introduced on Radio 4's magnificent Chris Morris vehicle On the Hour (later reincarnated on TV as The Day Today) as a sub-David Coleman sports reporter, he then got his own show, Knowing Me Knowing You with Alan Partridge, first on Radio 4, then on BBC TV, and he made me laugh.

But, for me, Alan really reached the heights of comedy with two TV series, both called I'm Alan Partridge (1997 and 2002).

I've missed Alan's misadventures in the intervening years but he's back, stepping in to co-present a The One Show spoof on BBC One called This Time with Alan Partridge.

It began this week, and I was - very unusually for a modern BBC comedy - rather looking forward to it and hoping it would be laugh-out-loud hilarious and a masterpiece to rival the comedic gems of 1997 and 2002.

Its format was part Knowing Me Knowing You with Alan Partridge/part I'm Alan Partridge - a spoof chat show with mockumentary asides.

It merged Alan's past into his 2019 experience.

Looking back, I don't think I'd wasted half an hour watching it and I laughed a few times. But it wasn't comedy gold. It was comedy silver at best.

So, following Sue's example, I checked out the reviews and found most of the newspaper TV reviewers giving it an astonishing 5 stars.

I couldn't believe what I was reading. It just wasn't that good.

Yes, at a heavy push, and taking into account the poverty of BBC TV comedy these days, this might - at an even heavier push - be called 4  star TV.

But, in truth, it was firmly 3 star TV - a curate's egg BBC comedy if ever there was one.

And, below the line at the various paper reviews, I found lots of people agreeing with my muted enthusiasm and failing to understand the 5 star reviews from the newspapers' reviewers.

(A question for a proper media studies department at a proper university, maybe?)

Thankfully, of all people, Hugo Rifkind of The Times rode to the rescue of my sanity yesterday by writing the following:

Fans of Alan Partridge seem to be pretty evenly divided over whether the new This Time with Alan Partridge is broadly brilliant with disappointing bits or broadly disappointing with brilliant bits. For me, much as I enjoyed it, and indeed much as it sometimes made me gasp with delight (of course Partridge says “terrorist” in a Northern Irish accent, apropos of nothing, why would he not?) the near-universal five-star reviews were a bit of a surprise.

Amens and alleluias to that!

Still, at least - so far - it's not the Brexit-supporter-mocking bash we were originally led to believe it would be, so I'll obviously have to sigh and smile then and simply settle for throw-back comedy silver.
Posted by Craig at 20:46