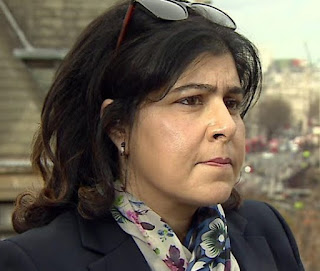 UK blasphemy law proposed by Baroness Warsi. The Baroness is miffed. All the hooha about antisemitism in the Labour Party has left the Muslims feeling sidelined.

In a cunning bid for supremacy in the ongoing struggle for the top slot in the victimhood Olympics, Warsi and her allies have deemed it Islamophobic to express a negative view of Islam.

“There are MPs that have made hurtful anti-Muslim comments, the most notorious example recently was Boris Johnson’s article in the Daily Telegraph in August of last year where he called Muslim women who wear the burka - he compared them to letterboxes.”

Let’s just remind ourselves; in that infamous article, was Boris Johnson proposing to ban Muslim women wearing the wretched thing or defending their right to do so?  Yep, the latter; unlike in France, where it’s illegal.

In the course of the article Boris made a flippant comparison between the burka’s rectangular peep-hole and that of the letterbox - but now that our moral compass lies in the hands of the Twitterati, flippancy is a reckless game. But for goodness sake, what else are rectangular slit-like peep-holes supposed to look like? Think of something rectangular and peep-holey and write in on a postcard.

For this amusing and unarguably reasonable comparison, a full investigation appears to have taken place. By whom? The Tory Party flippancy police?

On Tuesday’s Politics Live James Cleverly made a grovelling apology for a remark made by expelled Tory council candidate Peter Lamb, and assured us that the offending blasphemer has been defenestrated and stripped of all his privileges. Here’s the remark, made, allegedly, on Twitter in 2015.

“Islam like alcoholism [sic]. The first step to recovery is admit you have a problem.”

The offending comment was about Islam itself. It’s not clear whether the actual offence was caused by likening Islam to alcoholism, or by the implication that there was “a problem” within the religion.

Baroness Warsi herself has accused Theresa May of something very similar about  “acknowledging a problem”, so would not complaining about that be rather hypocritical on her part?

"Criticising the party's handling of Islamophobia claims, the peer said Theresa May "doesn't listen" and she had failed to "acknowledge when there is a problem".

Shouldn’t Warsi apologise, grovelingly, for implying that the Conservative Party should ‘admit’ its problem?

"More BBC coverage about anti-Semitism & Labour. OK but still no coverage of Islamophobia in the Cons Party" 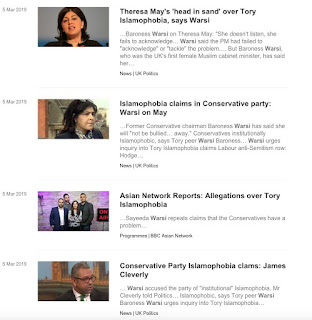 That's Twitter for you. Either way, the antisemitic remarks that have become commonplace amongst Corbyn’s followers are about Jews as a people. Islamophobia and antisemitism can hardly be considered equally deserving of grovelling apologies. Not that Corbyn’s apologies were grovelling. Or even apologies.

Islam is a religious and political ideology, which should not be immune from criticism in a non-Islamic country like Britain, nor should criticism of Islam be classified as racist.

Douglas Murray The false equivalence between Islamophobia and anti-Semitism (Spectator (£) )

“If I had a pound for every time I have had to make the point I am about to make I could well become as rich as Jeremy Corbyn. But here we go again: anti-Semitism is hatred or suspicion of Jews because they are Jews. It is an irrational prejudice built on centuries of stereotypes and hatreds which culminated in the worst crime in human history, on our continent, in the last century.

‘Islamophobia’, by contrast, is a term which can claim almost anything that the wielder claims it to mean.  So in many peoples’ eyes, it is ‘Islamophobic’ to ever say anything negative about any aspect of Islam or any action carried out by any Muslim in the name of their faith.  Among much else, those who wield the term seem to hope that they can present the situation of Muslims in modern Europe as so dire that they have pretty much already suffered an equal amount to the Jews of Europe in the twentieth century.  Islamists, their sympathisers and useful idiots appear to be hoping that if they can point to some mean things said on social media then in time they can present this as indistinguishable from the organised murder, in living memory, of six million Jews.”

If it’s forbidden to criticise Islam, that is a de facto blasphemy law is it not?
Posted by sue at 20:52